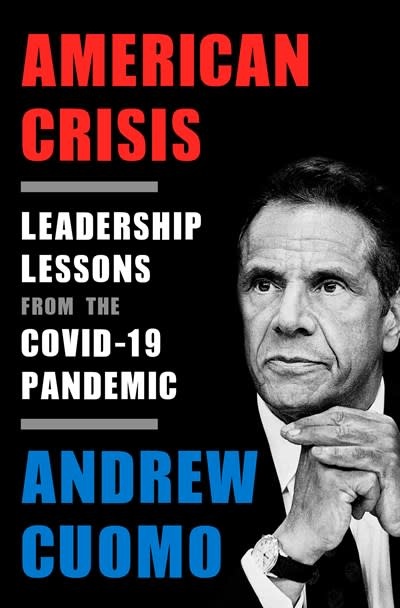 Governor Andrew Cuomo tells the riveting story of how he took charge in the fight against COVID-19 as New York became the epicenter of the pandemic, offering hard-won lessons in leadership and his vision for the path forward.

When COVID-19 besieged the United States, New York State emerged as the global “ground zero” for a deadly contagion that threatened the lives and livelihoods of millions. Quickly, Governor Andrew Cuomo provided the leadership to address the threat, becoming the standard-bearer of the organized response the country desperately needed. With infection rates spiking and more people dying every day, the systems and functions necessary to combat the pandemic in New York—and America—did not exist. So Cuomo undertook the impossible. He unified people to rise to the challenge and was relentless in his pursuit of scientific facts and data. He quelled fear while implementing an extraordinary plan for flattening the curve of infection. He and his team worked day and night to protect the people of New York, despite roadblocks presented by a president incapable of leadership and addicted to transactional politics.

Taking readers beyond the candid daily briefings that became must-see TV across the globe, and providing a dramatic, day-by-day account of the catastrophe as it unfolded, American Crisis presents the intimate and inspiring thoughts of a leader at an unprecedented historical moment. In his own voice, Governor Cuomo chronicles the incredible ingenuity and sacrifice required of so many to fight the pandemic, sharing a gripping behind-the-scenes account of the decision-making that shaped his policy as well as his frank assessment of his interactions with President Trump and other federal, state, and health officials. Real leadership, he shows, requires clear communication, compassion for others, and a commitment to truth-telling—no matter how frightening the facts may be.

Including a game plan for what we as individuals—and as a nation—need to do to protect ourselves against this disaster and those to come, American Crisis is a remarkable portrait of selfless leadership and a gritty story of difficult choices that points the way to a safer future for all of us.

Andrew Cuomo is the 56th Governor of New York, serving since 2011. He is the author of All Things Possible: Setbacks and Success in Politics and Life and Crossroads: The Future of American Politics.