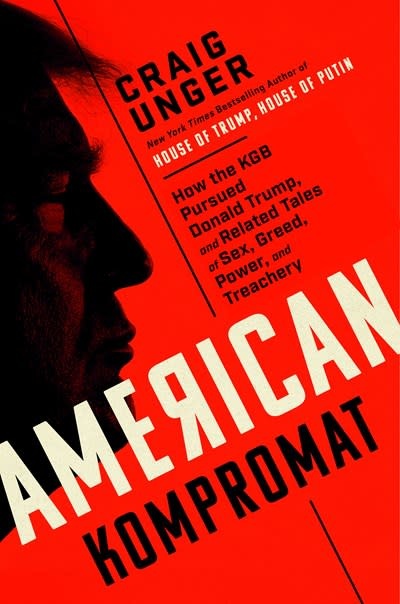 American Kompromat tells the story of the unimaginably corrupt, dissolute, and decadent subculture of the most powerful people in the world and how they have orchestrated, obtained, and used kompromat—Russian for compromising information—as leverage to achieve their political goals.

In the followup to New York Times bestseller House of Trump, House of Putin, American Kompromat will be situated in the context of the Trump-Russia scandal and the new era of hybrid warfare, kleptocrats, and authoritarian right-wing populism. But this time, rather than follow a trail of laundered money, Craig Unger will be reporting on kompromat—the Russian word for compromising information—operations that amassed the dirty little secrets of the richest and most powerful men on earth.

Set in a world of Upper East Side mansions and private Caribbean islands, of gigantic yachts and private jets, American Kompromat will show that something much more sinister and important was taking place than the public could ever imagine—namely, that from Donald Trump to Jeffrey Epstein, kompromat operations documented the darkest secrets of the most powerful people in the world and transformed them into potent weapons.

Unger will explore the nature of the compromising material they obtained, how it was obtained, who was behind it (be they Russians, Israelis, or the new American variety of oligarch), who has had access to the material since it was produced, whether it has been used for blackmail or extortion, and what roles it has played in the Trump-Russia scandal.

Craig Unger is the author of six books, including the New York Times bestsellers House of Trump, House of Putin and House of Bush, House of Saud. For fifteen years he was a contributing editor of Vanity Fair, where he covered national security, the Middle East, and other political issues. A frequent analyst on MSNBC and other broadcast outlets, he was a longtime staffer at New York Magazine, has served as editor-in-chief of Boston Magazine, and has contributed to Esquire, The New Yorker, and many other publications. He also appears frequently as an analyst on MSNBC, CNN, and other broadcast outlets. Unger has written about the Trump-Russia scandal for The New Republic, Vanity Fair, and The Washington Post. He is a graduate of Harvard University and lives in Brooklyn, New York.