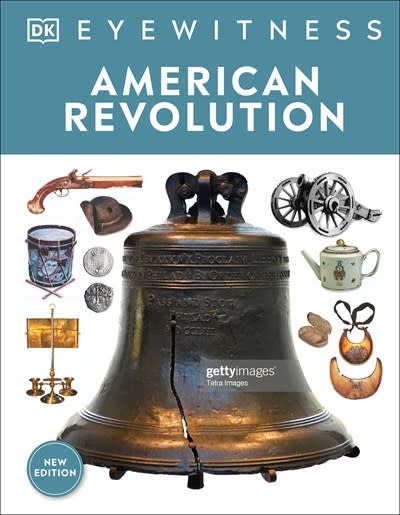 Become an eyewitness to the American struggle for independence, from the events that sparked the war to the signing of the Constitution.

This picture-led guide will take you on a visual tour through revolutionary America. Discover how American soldiers won battles against the British, plus see the muskets and cannons of the armies, learn how soldiers were drilled, and find out why Yorktown was not the end of the Revolution.

Eyewitness American Revolution will bring you face-to-face with American revolutionaries including George Washington, Thomas Jefferson, John Hancock, John Adams, and Benjamin Franklin. This museum in a book uses striking full-color photographs and illustrations of colonial weaponry, the notorious British redcoat uniform, deadly warships, the historic Declaration of Independence, and much more as well as amazing facts, infographics, statistics, and timelines to help bring this extraordinary war to life.

Part of DK’s best-selling Eyewitness series, which is now getting an exciting makeover, this popular title has been reinvigorated for the next generation of information-seekers and stay-at-home explorers, with a fresh new look, new photographs, updated information, and a new “eyewitness” feature – fascinating first-hand accounts from experts in the field.