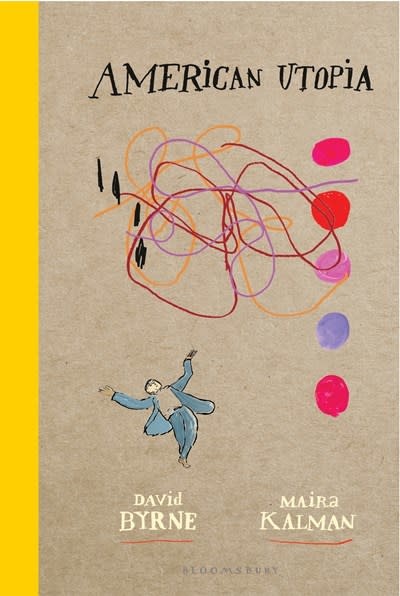 From former Talking Heads frontman and multimedia visionary David Byrne and bestselling author and artist Maira Kalman—a celebration in words and art of the connections between us all.

A joyful collaboration between old friends David Byrne and Maira Kalman, American Utopia offers readers an antidote to cynicism, bursting with pathos, humanism, and hope—featuring his words and lyrics brought to life with more than 150 of her colorful paintings.

The text is drawn from David Byrne’s American Utopia, which has become a hit Broadway show—returning to Broadway on September 18, 2020, and soon to be a documentary from Spike Lee. The four-color artwork, by Maira Kalman, which she created for the Broadway show’s curtain, is composed of small moments, expressions, gestures, and interactions that together offer a portrait of daily life and coexistence.

With their creative talents combined, American Utopia is a salvo for kindness and a call for jubilation, a reminder to sing, dance, and waste not a moment. Beautifully designed and edited by Alex Kalman, American Utopia is a balm for the soul from two of the world’s most extraordinary artists.