Home » Among the Beasts & Briars 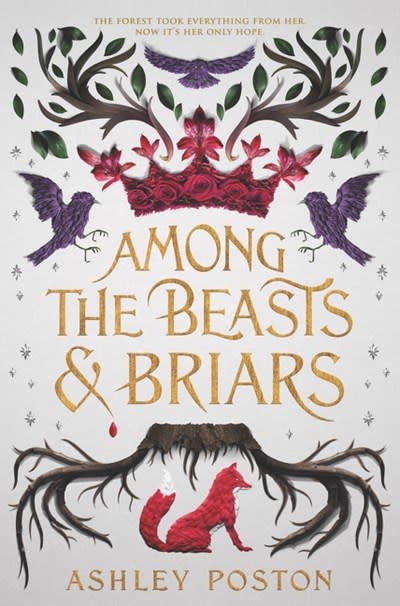 Among the Beasts & Briars

From the author of the breakout hit Heart of Iron comes a sweeping fairy-tale-inspired stand-alone fantasy adventure filled with fun and engaging characters, surprising twists, unexpected romance, and a dark forest rife with secrets and monsters.

Cerys is safe in the kingdom of Aloriya.Here there are no droughts, disease, or famine, and peace is everlasting. It has been this way for hundreds of years, since the first king made a bargain with the Lady who ruled the forest that borders the kingdom. But as Aloriya prospered, the woods grew dark, cursed, and forbidden. Cerys knows this all too well: when she was young, she barely escaped as the woods killed her friends and her mother. Now Cerys carries a small bit of the curse—the magic—in her blood, a reminder of the day she lost everything. The most danger she faces now, as a gardener’s daughter, is the annoying fox who stalks the royal gardens and won’t leave her alone.As a new queen is crowned, however, things long hidden in the woods descend on the kingdom itself. Cerys is forced on the run, her only companions the small fox from the garden, a strange and powerful bear, and the magic in her veins. It’s up to her to find the legendary Lady of the Wilds and beg for a way to save her home. But the road is darker and more dangerous than she knows, and as secrets from the past are uncovered amid the teeth and roots of the forest, it’s going to take everything she has just to survive.Acclaimed author Ashley Poston returns with a dark, lush, fairy-tale-inspired fantasy about the broken pieces inside all of us and the courage it takes to put them back together again.

Ashley Poston loves dread pirates, moving castles, and starry night skies. When not lost in a book, she’s lost in real life, searching for her next great adventure. She is also the author of Geekerella, The Princess and the Fangirl, Heart of Iron, and its follow-up, Soul of Stars. Ashley can be found online at www.ashposton.com.