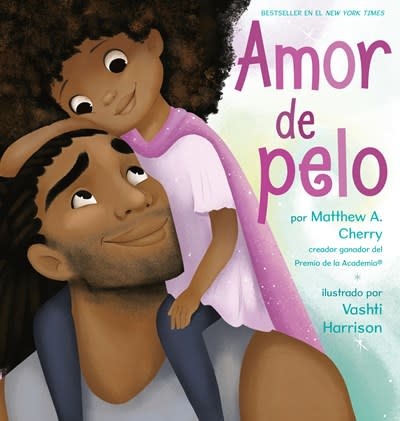 By Matthew A. Cherry

“I love that Hair Love is highlighting the relationship between a Black father and daughter. Matthew leads the ranks of new creatives who are telling unique stories of the Black experience. We need this.”

It’s up to Daddy to give his daughter an extra-special hair style in this ode to self-confidence and the love between fathers and daughters, from Academy-Award winning director and former NFL wide receiver Matthew A. Cherry and New York Times bestselling illustrator Vashti Harrison.

Zuri’s hair has a mind of its own. It kinks, coils, and curls every which way. Zuri knows it’s beautiful. When Daddy steps in to style it for an extra-special occasion, he has a lot to learn. But he LOVES his Zuri, and he’ll do anything to make her—and her hair—happy.

Tender and empowering, Hair Love is an ode to loving your natural hair—and a celebration of daddies and daughters everywhere.

Chicago native Matthew A. Cherry is a former NFL wide receiver-turned-filmmaker who played for the Jacksonville Jaguars, Cincinnati Bengals, Carolina Panthers, and Baltimore Ravens. In 2007 he retired and moved to LA to pursue a career in entertainment. Now, he directs music videos and short films, including Hair Love, the animated short film on which this book is based. Matthew was named Paste Magazine’s “10 Black Directors to Watch in 2016” list.

Vashti Harrison is the author-illustrator of the New York Times bestselling picture book Little Leaders: Bold Women in Black History, which is also a NAACP Image Award winner. She earned her BA from the University of Virginia with a double major in Media Studies and Studio Art, and received her MFA in Film and Video from CalArts, where she snuck into animation classes to learn from Disney and Dreamworks legends. There she rekindled a love for drawing and painting. Now, utilizing both skill sets, she is passionate about crafting beautiful stories in both the film and picture-book worlds.