Home » An Abolitionist's Handbook: 12 Steps to Changing Yourself and the World 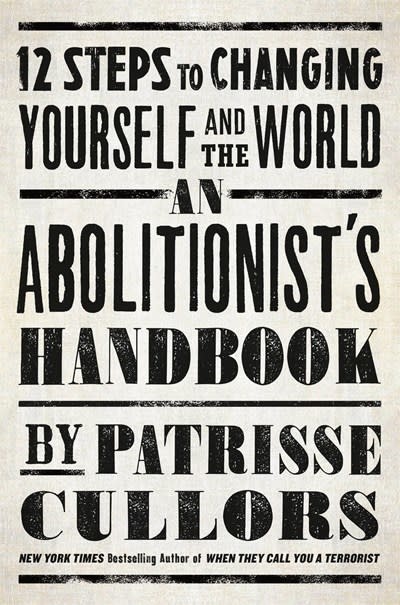 An Abolitionist's Handbook: 12 Steps to Changing Yourself and the World

In AN ABOLITIONIST’S HANDBOOK, Cullors charts a framework for how everyday activists can effectively fight for an abolitionist present and future. Filled with relatable pedagogy on the history of abolition, a reimagining of what reparations look like for Black lives and real-life anecdotes from Cullors AN ABOLITIONIST’S HANDBOOK offers a bold, innovative, and humanistic approach to how to be a modern-day abolitionist. Cullors asks us to lead with love, fierce compassion, and precision.

In AN ABOLITIONIST’S HANDBOOK readers will learn the 12 steps to change yourself and the world:

6. Allow Yourself to Feel

7. Commit to Not Harming or Abusing Others

12. Fight the U.S. State Rather Than Make It Stronger

AN ABOLITIONIST’S HANDBOOK is for those who are looking to reimagine a world where communities are treated with dignity, care and respect. It gives us permission to move away from cancel culture and into visioning change and healing.

Patrisse Cullors is a New York Times bestselling author, educator, artist and abolitionist from Los Angeles, CA. Co-founder of the Black Lives Matter Global Network Foundation, Patrisse has been on the frontlines of abolitionist organizing for 20 years. Since she began the Black Lives Matter movement in 2013, it has expanded into a global foundation supporting Black-led movements in the US, UK and Canada and has been nominated for the 2021 Nobel Peace Prize. The significance of the Black Lives Matter movement has been recognized by The New York Times as the “largest movement in US history.” TIME 100 also named Patrisse as one of the 100 most influential people in 2020. Patrisse has led multiple Los Angeles-based organizations, including Dignity and Power Now, Justice LA and Reform LA Jails. These organizations have won progressive ballot measures, fought against a $3.5 billion jail plan and implemented the first-ever Civilian Oversight Commission of the Los Angeles Sheriff’s Department. Patrisse is also the faculty director of Arizona’s Prescott College, a new Social and Environmental Arts Practice MFA program, which she developed nesting a curriculum focused on the intersection of art, social justice and community organizing that is first of its kind in the nation. As an outspoken abolitionist and artist, Patrisse combined these two passions in early February 2020 when she teamed up with Noé Olivas and Alexandre Dorriz to serve as a co-founder of the Crenshaw Dairy Mart, a reimagined art gallery and studio dedicated to shifting the trauma-induced conditions of poverty and economic injustice, bridging cultural work and advocacy, and investigating ancestries through the lens of Inglewood and its community. Not stopping there, Patrisse is also a former staff writer on Freeform’s Good Trouble series as well as an actress on the show. She also co-produced the 12-part YouTube Originals series titled RESIST, that premiered November 18, 2020. In 2020, Patrisse signed an overall production deal with Warner Brothers, where she intends to continue to uplift Black stories, talent and creators that are transforming the world of art and culture.