Home » An Atlas of Extinct Countries: The Remarkable (and Occasionally Ridiculous) Stories of 48 Nations That Fell Off the Map 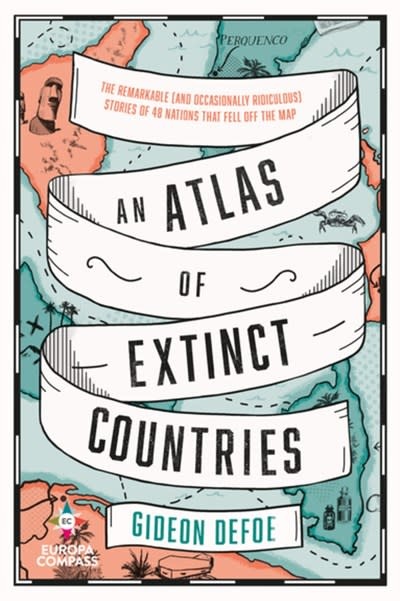 An Atlas of Extinct Countries: The Remarkable (and Occasionally Ridiculous) Stories of 48 Nations That Fell Off the Map

The remarkable (and occasionally ridiculous) stories of 48 nations that fell off the map.“Countries are just daft stories we tell each other. They’re all equally implausible once you get up close.”Countries die. Sometimes it’s murder, sometimes it’s by accident, and sometimes it’s because they were so ludicrous they didn’t deserve to exist in the first place. This is an atlas of 48 nations that fell off the map. Their causes of death range from the implausible (jerky prices) to the unfortunate (too evil) to the downright bizarre (the flip of a coin). The polite way of writing an obituary is: dwell on the good bits, gloss over the embarrassing stuff. This book refuses to do so, because these dead nations are so ridiculous that it’s impossible to skip the embarrassing stuff. ★ “This book is a sparkling gem.”—Booklist (Starred Review)“Perfect for fans of Atlas Obscura.”—Publishers Weekly

Gideon Defoe is the author of The Pirates! book series and wrote the screenplay for the Oscar nominated Aardman film The Pirates in an Adventure with Scientists. He has written about how animals have sex and penned a computer game tie-in novel for Gollancz. He does film development work with Locksmith Animation and Studio Canal, and is developing a sitcom with BBC studios.