Home » An Immense World: How Animal Senses Reveal the Hidden Realms Around Us 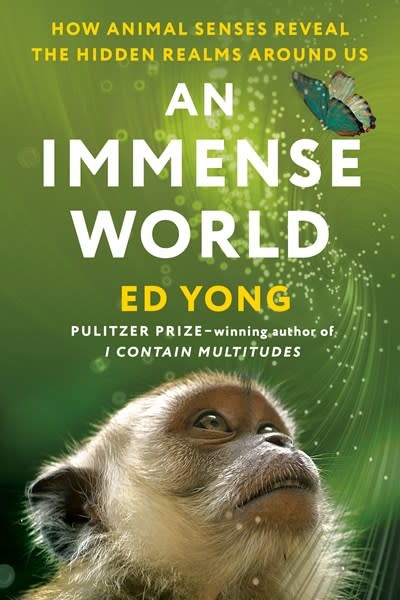 An Immense World: How Animal Senses Reveal the Hidden Realms Around Us

A grand tour through the hidden realms of animal senses that will transform the way you perceive the world—from the Pulitzer Prize-winning, New York Times bestselling author of I Contain Multitudes.

The Earth teems with sights and textures, sounds and vibrations, smells and tastes, electric and magnetic fields. But every animal is enclosed within its own unique sensory bubble, perceiving but a tiny sliver of an immense world. This book welcomes us into a previously unfathomable dimension—the world as it is truly perceived by other animals.

We encounter beetles that are drawn to fires, turtles that can track the Earth’s magnetic fields, fish that fill rivers with electrical messages, and humans that wield sonar like bats. We discover that a crocodile’s scaly face is as sensitive as a lover’s fingertips, that the eyes of a giant squid evolved to see sparkling whales, that plants thrum with the inaudible songs of courting bugs, and that even simple scallops have complex vision. We learn what bees see in flowers, what songbirds hear in their tunes, and what dogs smell on the street. We listen to stories of pivotal discoveries in the field, while looking ahead at the many mysteries which lie unsolved.

In An Immense World, author and acclaimed science journalist Ed Yong coaxes us beyond the confines of our own senses, allowing us to perceive the skeins of scent, waves of electromagnetism, and pulses of pressure that surround us. Because in order to understand our world we don’t need to travel to other places; we need to see through other eyes.

Ed Yong is a Pulitzer Prize-winning science writer on the staff of The Atlantic, where he also won the George Polk Award for science reporting, among other honors. His first book, I Contain Multitudes, was a New York Times bestseller and won numerous awards. His work has appeared in The New Yorker, National Geographic, Wired, The New York Times, Scientific American, and more. He lives in Washington, D.C.