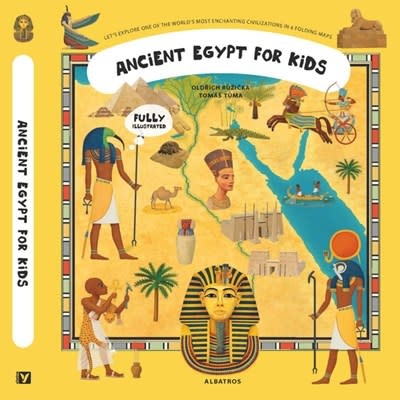 The amous ancient civilization along the Nile River depicted in a novelty format like never before. 2022 is the anniversary year 100 years of the discovery of Tutankhamun's tomb by Howard Carter!

Over 5‚000 years ago, a civilization developed along the Nile River whose sights and remnants are still enchanting people from all over the world. Huge wonderful pyramids, stone temples, decorated tombs, larger-than-life statues of rulers, tall columns, obelisks, and other memorials can be seen in Egypt wherever you look. Still, many sights are waiting to be freed from the African sands and it remains somewhat mysterious how Egyptian builders could create such towering, beautiful buildings, considering the limited technology of the day. Let’s take a walk together, see the most wonderful Egyptian sights, and learn what life in Ancient Egypt looked like for pharaohs, officials, soldiers, and ordinary people.

Oldrich Ruzicka studied at Faculty of Education and worked as teacher for a few years. Before he decided to found his own publishing house, he worked many years as a chief-editor and publisher of a big Czech publishing house. Later his publishing house became a part of Albatros Media. He is highly successful author of children’s literature whose books have been translated into many languages.

Tomas Tuma studied English and Art Education. Currently he is a freelance illustrator, photographer and programmer. He as an author of educational adventure books for children, where he can popularize modern technologies. He likes walking in the woods.