Home » Angels of the Resistance 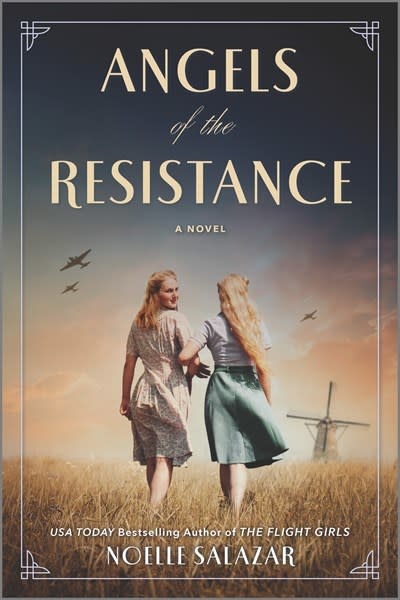 Angels of the Resistance

The second WWII novel by Noelle Salazar, bestselling author of the THE FLIGHT GIRLS, follows two teenage sisters in the Netherlands who are recruited as part of the Dutch Resistance effort against the Nazis. Inspired by true events, this moving story about ordinary young women who become extraordinary heroes will appeal to fans of Pam Jenoff and Kate Quinn.

Netherlands, 1940. In the small town of Haarlem, fourteen-year-old Lien lives a simple life with her mother and sister in a farmhouse on the outskirts of the city. Elsewhere in Europe bombs are falling, but the pall on their house is more from the recent loss of their baby sister as a result of an accident Lien believes she could have prevented than from the oncoming war. Until the Nazis invade the Netherlands and their lives are overturned once more. Recruited by their late father’s friend, Lien’s older sister Elif reluctantly joins the Dutch resistance movement. Spurred by the injustice of the Nazis’ treatment of Dutch citizens as well as a terrifying bombing of their small town, and forever seeking atonement for her baby sister’s death, Lien begs to join as well. The sisters’ youthful, innocent looks and ability to disappear into a crowd make them the perfect resistance soldiers. Together with a handful of like-minded youth, including the gallant Charlie with whom Lien forms an instant connection, the sisters are trained and begin to carry out missions, from distributing and collecting information to moving Jewish families from hiding places to luring and killing influential Nazis. The toll of the war and their work is evident in their collective psyches, and Lien starts to make mistakes that could cost her and her newfound friends their lives. Until one very personal mission shows her that the atonement she desperately seeks for her sister’s death cannot be found at the end of the barrel of a pistol, but must be found from within her heart.

Noelle Salazar was born and raised in the Pacific Northwest, where she’s been a Navy recruit, a medical assistant, an NFL cheerleader, and always a storyteller. When she’s not writing, she can be found dodging raindrops and daydreaming of her next book. Her first novel, The Flight Girls, was an instant bestseller, a Forbes, Woman's World & Hypable book of the month and a BookBub Top Recommended book from readers. Angels of Haarlem is her second novel. Noelle lives in Bothell, Washington, with her husband and two children.