Home » Animal, Vegetable, Junk: A History of Food, from Sustainable to Suicidal 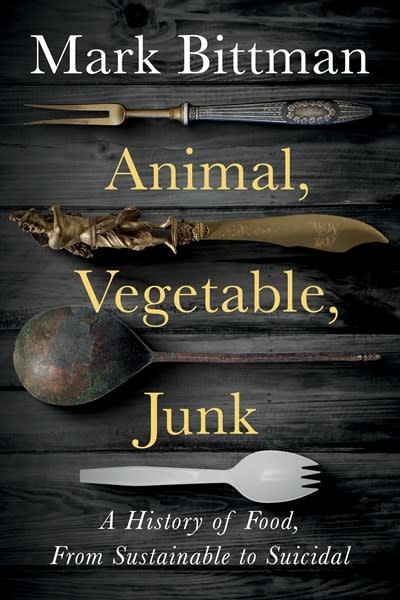 Animal, Vegetable, Junk: A History of Food, from Sustainable to Suicidal

From hunting and gathering to GMOs and ultraprocessed foods, this expansive tour of human history rewrites the story of our species—and points the way to a better future.

The history of Homo sapiens is usually told as a story of technology or economics. But there is a more fundamental driver: food. How we hunted and gathered explains our emergence as a new species and our earliest technology; our first food systems, from fire to agriculture, tell where we settled and how civilizations expanded. The quest for food for growing populations drove exploration, colonialism, slavery, even capitalism.

A century ago, food was industrialized. Since then, new styles of agriculture and food production have written a new chapter of human history, one that’s driving both climate change and global health crises. Best-selling food authority Mark Bittman offers a panoramic view of the story and explains how we can rescue ourselves from the modern wrong turn.

MARK BITTMAN is the author of thirty acclaimed books, including the How to Cook Everything series, the award-winning Food Matters, and the New YorkTimes number-one bestseller, VB6: Eat Vegan Before 6:00. For more than two decades his popular and compelling stories appeared in the Times, where he was ultimately the lead food writer for the Sunday magazine and became the country's first food-focused Op-Ed columnist for a major news publication. Bittman has starred in four television series, including Showtime's Emmy-winning Years of Living Dangerously. He has written for nearly every major newspaper in the United States and many magazines and has spoken at dozens of universities and conferences; his 2007 TED talk has had more than a million views. In 2015 he was a distinguished fellow at the University of California, Berkeley; he is currently a fellow at the Union of Concerned Scientists. Throughout his career Bittman has strived for the same goal: to make food, in all its aspects, understandable. He can be found at markbittman.com, @bittman on Twitter, and @markbittman on Instagram.