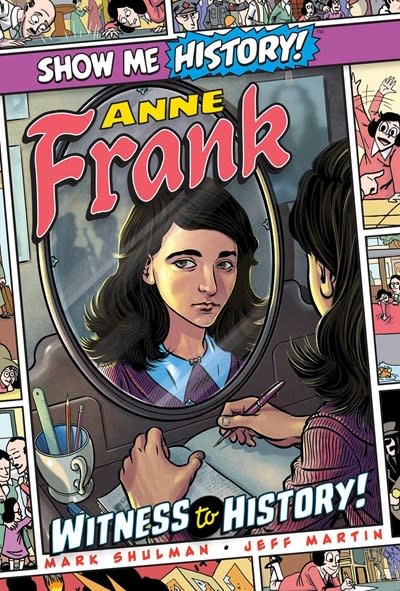 A biography of Anne Frank—a young witness to the atrocities of the Nazis during World War II—told in graphic novel format.

Few stories are as moving as that of Anne Frank, a young Jewish girl who became known to the world only when her diary was published posthumously after the end of World War II. Anne Frank: Witness to History! is the biography—in graphic novel format—of the courageous girl who hid with her family from Nazi occupants in Amsterdam, living for two years in a secret annex behind a bookcase. The story begins with the rise of the Nazi Party in Germany and chronicles the events of the 1930s and 1940s that led to World War II and the Holocaust. Every day spent in hiding brought new anxieties to Anne and her family, until the day they were discovered and sent to concentration camps. Full-color illustrations and historically accurate text make this biography an educational and inspiring read for those who enjoy history and graphic novels.

Mark Shulman has written more than 150 books for kids of all ages, including illustrated stories for Marvel Comics, Scholastic, Chronicle Books, Simon & Schuster, and more. Their subjects include The Incredible Hulk, Madagascar, Shamu the orca, The Amazing World of Gumball, and others. Mark started reading comics when they cost just 15 cents and hasn't stopped. He's still got Silver Surfer #1 in very fine condition, and he's not letting it go.