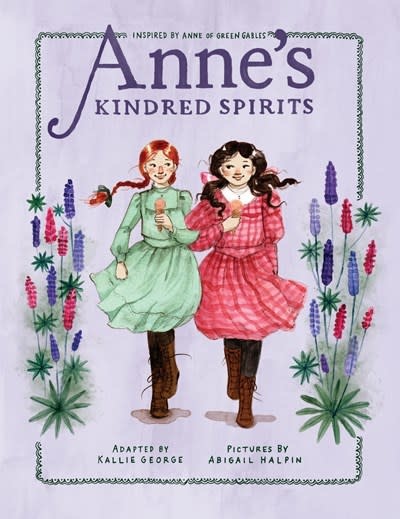 The sweet and funny second book in a new early-reader series, starring the spirited and outspoken Anne Shirley as she makes friends and settles into life at Green Gables—with a few hijinks along the way, of course!

Anne is nervous and excited to meet Diana, a neighbor girl who she just knows will be a kindred spirit. She’s even more excited when she learns that she’s invited to her very first picnic! Until Marilla’s precious brooch goes missing and it looks like it’s Anne’s fault. Marilla is upset and Anne’s picnic adventure is now in jeopardy. Ultimately, the misunderstanding with the brooch is resolved and Anne is able to go to the picnic. Anne and Diana’s friendship blossoms and Anne’s bond with Matthew and Marilla grows stronger.

KALLIE GEORGE is an author, editor and creative writing teacher. She has written numerous books for early readers, including Anne Arrives (book 1), The Magical Animal Adoption Agency series, The Heartwood Hotel series and The Wings of Olympus series, as well as numerous picture books, such as Goodnight, Anne, Secrets I Know and The Lost Gift. Kallie currently lives in Vancouver, BC, and feels positively certain she and Anne Shirley are kindred spirits.

ABIGAIL HALPIN is an illustrator living in southern Maine, a few miles from the sea. Her illustrations are a blend of traditional and digital media, and she has illustrated many beautiful children's books including Finding Wild, Fort Building Time and, most recently, Mama's Belly. Her parents gave her a copy of Anne of Green Gables for her eighth birthday, which still sits on her bookcase in her studio, and her work for the Anne chapter book series was influenced by her teen memories of Prince Edward Island as one of the most beautiful, magical spots on the planet.