Home » Anthony and the Gargoyle 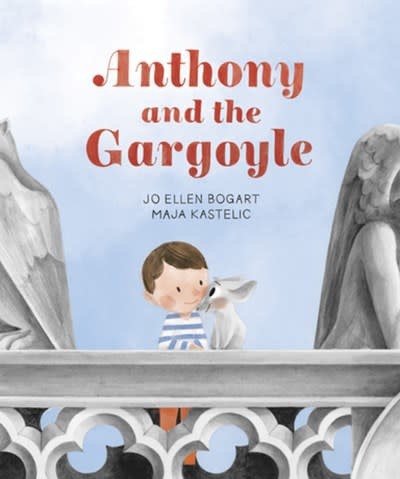 Anthony and the Gargoyle

A boy befriends a baby gargoyle in this magical wordless story in graphic-novel style from award-winning creators Jo Ellen Bogart and Maja Kastelic.Anthony’s house is full of family photos — of his parents’ trip to Paris, his great aunt, and Anthony himself as a toddler, holding his favorite rock.When Anthony wakes up one morning, he sees that his “rock” has cracked open — it’s hollow inside. He doesn’t see the little face peering out from the closet. Later, he discovers the newly hatched creature and they become friends. Anthony asks his mother about the rock, and she shows him a photo album of a trip to Paris. Anthony sees that his friend resembles the gargoyles at Notre-Dame cathedral. Back in his room, he shows the photos to the baby gargoyle who looks at them with longing.News arrives that Anthony’s great aunt is in hospital. The family travel to Paris to visit, and Anthony secretly brings the baby gargoyle. When the family have a chance to climb Notre-Dame’s tower, Anthony and his friend wander from one gargoyle to the next … until the baby gargoyle sees one that looks just like him.A bittersweet story of true friendship and letting go.Correlates to the Common Core State Standards in English Language Arts:CCSS.ELA-LITERACY.RL.1.7Use illustrations and details in a story to describe its characters, setting, or events.CCSS.ELA-LITERACY.RL.2.3Describe how characters in a story respond to major events and challenges.

Jo Ellen Bogart was born in Houston, Texas, and received degrees in elementary education and psychology from the University of Texas at Austin. She has written many children's books, including The White Cat and the Monk, illustrated by Sydney Smith, a Governor General's Award finalist and a USBBY Outstanding International Book. Her picture book Jeremiah Learns to Read, illustrated by Laura Fernandez and Rick Jacobson won the Ruth Schwartz Children's Book Award, and Gifts, illustrated by Barbara Reid, won the Amelia Frances Howard-Gibbon Illustrator's Award and was selected for IBBY's Honour List. Jo Ellen lives in Guelph, Ontario.MAJA KASTELIC received a BA in painting from the University of Ljubljana's Academy of Fine Arts and Design and studied philosophy and theory of visual culture at the University of Primorska. She restored frescoes before becoming a children's book author and illustrator. Her wordless picture book A Boy and a House was selected for the Bologna Illustrators Exhibition, the White Ravens Catalogue, Kirkus Best Wordless Picture Books and the IBBY Honour List. She has received a BIB Plaque at the Biennial of Illustrations, Bratislava. Maja lives in Trebnje, Slovenia.