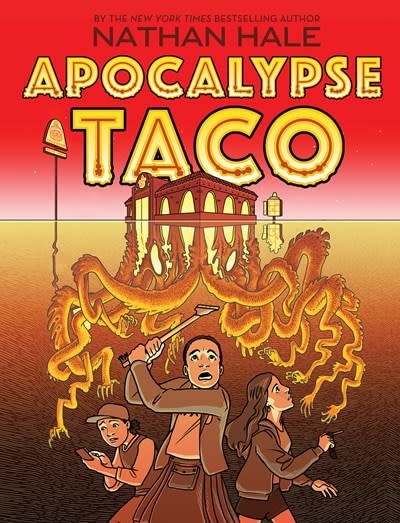 From bestselling author Nathan Hale, a fast-food run turns strange when the drive-through becomes a portal to another dimension

A sinister drive-through threatens to end the world—and three kids in a beat-up truck are humanity’s only hope! The night before dress rehearsal, a school theater troupe is working late and very hungry. So 11-year-old twins Axl and Ivan—along with their 16-year-old driver, Sid—volunteer to make a late-night fast-food run. At the drive-through, their tacos start to move. And they don’t seem friendly! Even after they get rid of the food, the world around them isn’t quite right. There are strangely-moving cars, buildings, and people—and they seem intent on swallowing everything in their path. Now the trio will have to use their wits, their truck, and even their windshield scraper to escape . . . before they’re replaced by monstrous versions of themselves!

Nathan Hale is the #1 New York Times bestselling author and illustrator of the Nathan Hale’s Hazardous Tales series and the graphic novel One Trick Pony. He lives in Orem, Utah.