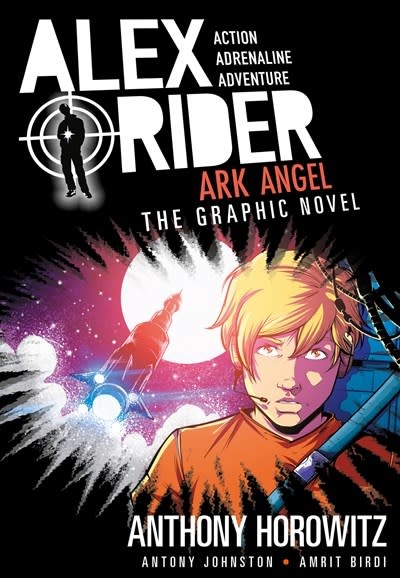 After a chance encounter with the son of billionaire Nikolei Drevin, Alex Rider finds himself in the middle of an international plot to destroy the Pentagon. The weapon Ark Angel, a revolutionary space hotel with catastrophic potential.

Anthony Horowitz is the author of the number one best-selling Alex Rider books and the Power of Five series. He has enjoyed huge success as a writer for children and adults, most recently with the latest Alex Rider adventures, Never Say Die and Secret Weapon, and the new James Bond novel Forever and a Day. He has also created and written many major television series, including the award-winning Foyle’s War. he has won numerous awards, including the Bookseller Association/Nielsen Author of the Year Award, the Children’s Book of the Year Award at the British Book Awards, and the Red House Children’s Book Award. In 2014 Anthony Horowitz was awarded an OBE for Services to Literature.

Antony Johnston is an award-winning author of many comics and graphic novels in everything from horror to romance and has also written video games books and animation. He has reinvented Marvel’s flagship character Wolverine for manga and adapted many of Alan Moore’s prose works into comic form. He lives in Barnoldswick, Lancashire.

Amrit Birdi is the illustrator of the successful graphic novel Username: Evie, written by YouTuber Joe Sugg, and the follow-up titles Username: Regenerated and Username: Uprising. He has also worked as an artist for many different international companies, including Netflix, ITV, Warner Bros., Porsche, Ubisoft, and Nike. Amrit Birdi lives in London.