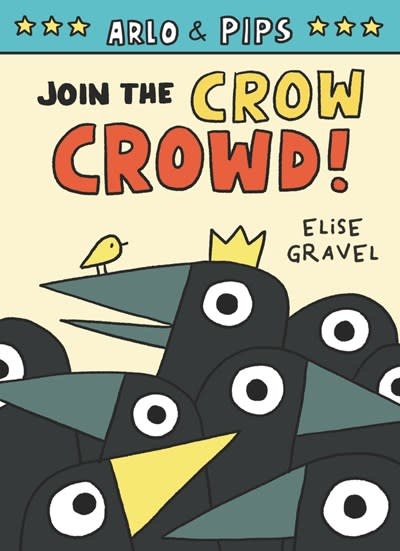 Arlo & Pips are back for book #2! When Pips urges Arlo to meet other crows, it's Marla—a super-smart lab crow—who Arlo wants to get to know best in this graphic chapter book series by Elise Gravel that Kirkus Reviews called "a charming treasure."

Caw, caw!! Another delightful book about Arlo & Pips is on the way! The Crow Crowd is the second book in the new early graphic series from HarperAlley that Kirkus Reviews called "deceptively simple" and "a perfect match for newly independent readers." Fans of Narwhal & Jelly will be excited to know that Ben Clanton is a fan of Arlo & Pips and called it “fun and informative!" In fact, Clanton raved, "This book will FLY off the shelves!” In the first book, readers met Arlo, a crow with a big brain and an even bigger personality—and of course, his pal, Pips. Now the guys are back in The Crow Crowd, and Pips is trying to convince Arlo to make friends with some crows. Pips knows how to push Arlo in just the right way, and soon another crow has invited Arlo to have lunch in the baseball field. "I love this place," says the other crow, "because humans always leave bits of hot dogs in the bleachers after games." Arlo is game, and soon he discovers that not only is this other crow really smart and fun, she's also a girl crow. Her name is Marla, and she's so clever and knows so many interesting things that Arlo doesn't even mind that she's a girl. Filled with the same funny and fascinating factoids (they appear as big footnotes with red stars) Arlo & Pips #2: The Crow Crowd is another terrific adventure in the Arlo & Pips series brought to you by HarperAlley.

Elise Gravel loves all animals, especially her two cats, who are not as clever as Arlo but pretty funny all the same. She is the creator of the Olga series inspired by her science-loving daughter, as well as many other books for children, including I Want a Monster!,The Cranky Ballerina, and Puppy in My Head: A Book about Mindfulness. Elise lives in Montreal with her husband, two daughters, and those splendid cats. Find her at www.elisegravel.com.