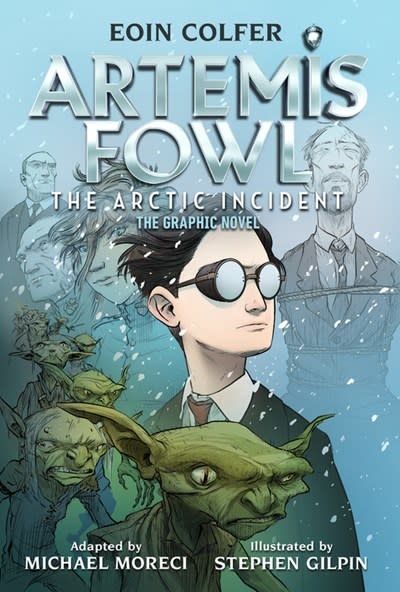 Catalog Copy: The second book in the internationally best-selling Artemis Fowl series by Eoin Colfer is available as a full-color graphic novel with all-new text and artwork.

The world's youngest, brightest, and most dangerous criminal mastermind is back.

Artemis Fowl receives an urgent e-mail from Russia. In it is a plea from a man who has been kidnapped by the Russian Mafiya: his father.

As Artemis rushes to his dad's rescue, he is stopped by a familiar nemesis: Captain Holly Short of the LEPrecon fairy police. Now, instead of battling the fairies, Artemis must join them if he wants to save one of the few people in the world he loves.

This all-new adaptation with exciting and cinematic full-color artwork will engage fans both old and new and leave them eagerly awaiting the next installment.

Author Bio: Eoin Colfer is the author of the New York Times best-selling Artemis Fowl series, the first book of which was adapted into a major motion picture from the Walt Disney Studios. He also wrote the series spin-offs The Fowl Twins and The Fowl Twins Deny All Charges, as well as many other titles for young readers and adults, including Highfire, Iron Man: The Gauntlet, Airman, Half Moon Investigations, Eoin Colfer's Legend of . . . books, The Wish List, Benny and Omar; and Benny and Babe. In 2014, he was named Ireland's laureate for children's literature. He lives with his wife and two sons in Dublin, Ireland. To learn more, visit www.eoincolfer.com. He is also on Twitter and Instagram @EoinColfer.

Michael Moreci is a bestselling comics author and novelist. His novels include Black Star Renegades and its sequel, We Are Mayhem. In the comics world, he's created numerous critically acclaimed original titles (Wasted Space, The Plot, Curse) and has written for many established universes (Star Wars, Archie, Stranger Things). Michael lives in Oak Park with his family. Follow him on Twitter @MichaelMoreci.

Illustrator Bio: Stephen Gilpin (www.sgilpin.com) is the illustrator of more than thirty children's books, including Volume 2 in the Wires and Nerve graphic novel series based on Marissa Meyer's Lunar Chronicles. Follow him on Twitter @Sparkgilpin.