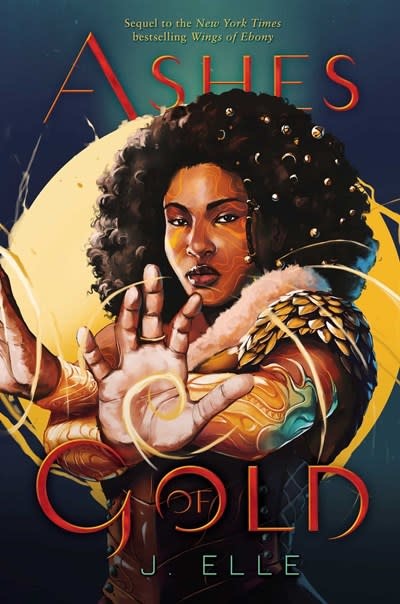 But getting free and finding her friends is only half the battle. Rue vows that when she reunites with them, she will find a way to return the magic that the Chancellor has stolen from her father’s people. Yet even on Yiyo Peak, Rue is a misfit; with half a foot back in Houston and a heart that is half human, half god, she’s not sure she’s the right person to lead the fight to reclaim a glorious past.

When a betrayal sends her into a tailspin, Rue must decide who to trust and how to be the leader that her people deserve, because if she doesn’t, it isn’t just Yiyo that will be destroyed—it will be Rue herself.

J. Elle is the author of the instant New York Times and Indie bestseller Wings of Ebony, a YA novel about a Black teen who must lean into her ancestor’s magic to protect her inner-city community from drugs, violence, and crime. Ms. magazine calls it “the debut fantasy we need right now.” She also wrote its sequel, Ashes of Gold. Elle is a former educator and first-generation college student with a bachelor’s degree in journalism and a master’s in educational administration and human development. When she’s not writing, Elle can be found mentoring aspiring writers, binging reality TV, loving on her three littles, or cooking up something true to her Louisiana roots.