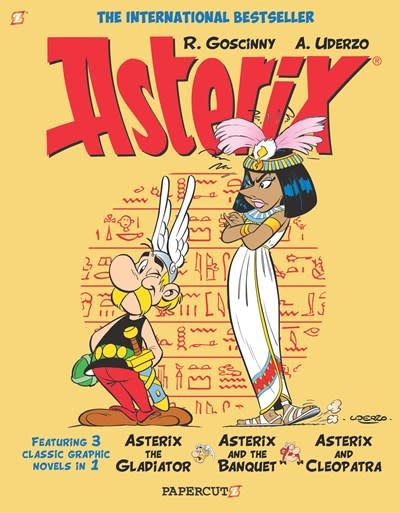 Asterix mixes it up with everyone from Julius Caesar to Cleopatra in this outstanding Omnibus!

After conquering Europe, where this feisty, little warrior is a true pop culture super-star, Asterix is invading America with another three classic adventures, newly translated into American English. Asterix conquered Europe ironically by keeping his tiny village in Gaul from being conquered by the Roman Empire. Turns out, Asterix and his fellow villagers have a secret weapon, a potion that imbues them all with super strength. But the Romans aren’t about to give up no matter how many times Asterix and his friends fend them off. These classic comics are not only incredibly entertaining, but the historic figures are brought to life in a way that’s exciting and humanizing, providing educational elements similar to the Geronimo Stilton graphic novels.