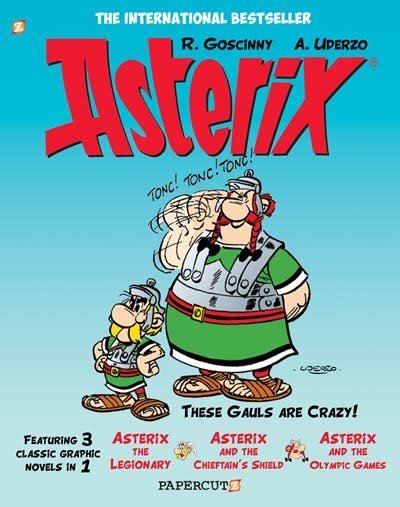 In “Asterix the Legionary,” one of the three classic Asterix graphic novels collected here, Asterix and Obelix do as the Romans do and join the Roman Legion in hopes to get closer to Obelix’s big crush in the process. Instead, the troops are sent far from Gaul to North Africa. Then, in “Asterix and the Chieftain’s Shield” with the village chief away, Caesar and his men come to play—and get their hands on a priceless Gaul shield! Asterix must foil their search and protect his village. Then Asterix heads to Greece to participate in the Olympic games. But how do the Gauls register themselves? As Romans? And is their powerful potion an ancient form of performance enhancers? It’s an international bout for the ages and just when you think you know what to expect in Asterix, the creators Goscinny and Uderzo throw things at you that you never could’ve imagined.