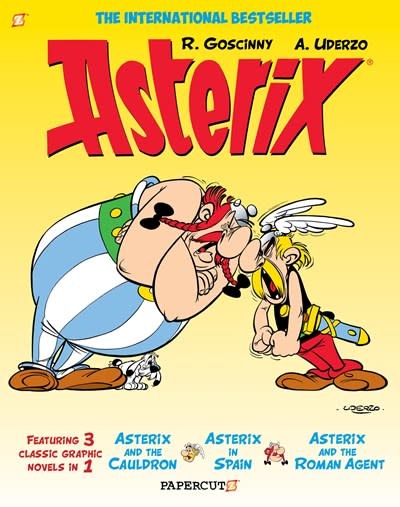 Asterix guards a cauldron full of loot, visits Spain, and is accused of spying for the Romans!

In “Asterix and the Cauldron,” when a local Gaulish chief wants a cauldron full of money kept out of Roman hands, he entrusts Asterix to guard the loot. When the cash disappears, Asterix and Obelix must find a way to make money… fast! “Asterix in Spain” features our Gaulish hero heading to the Iberian peninsula to rescue the Gran Chen Huevos y Bacon’s son. But with the return of the Chief’s son to Hispania, comes a culture shock for Asterix and friends. Could Cacofonix the Bard finally find a culture that enjoys his awful singing? “Asterix and the Roman Agent,” starts when rumors are spread that Asterix leaked the recipe for the power potion to Rome Asterix must find who started these terrible rumors. These three classic graphic novels are newly translated for an American audience. Includes a new afterword by Alexander Simmons providing historical and cultural context for Asterix, both in 50 B.C. and in the time the classic comics were made addressing various racial depictions

Rene Goscinny was born in Paris in 1926. After growing up in Argentina, he came to America where he shared a studio with future Mad magazine co-founder Harvey Kurtzman and collaborators Will Elder and Jack Davis. In 1959, he founded the magazine Pilote which premiered the most successful comic series anywhere: Asterix. He died suddenly cardiac arrest in 1977 at the age of 51.

Albert Uderzo was born in France 1927 to Italian Immigrants. In 1959 Goscinny and Uderzo became editor and artistic director (respectively) of Pilote magazine. Their creation, Asterix became a runaway success. After Goscinny's death in 1977, Uderzo continued to write and illustrate the Asterix books on his own, publishing 8 volumes.