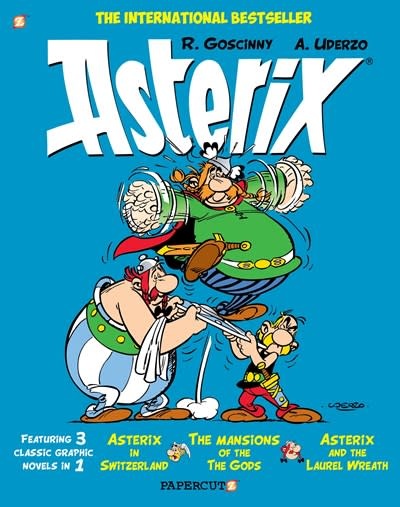 We find “Asterix in Switzerland” as the indomitable Gaulish warrior yodels in the Alps, has plenty of holey cheese, and stumbles upon Helvetica. Then, the villagers are tempted with “The Mansion of the Gods” with all the modern luxuries of Rome when a new housing development threatens to urbanize (and Romanize) their humble tribe. Finally, it is a true Roman circus as Obelix and Asterix head to Rome to get a key ingredient to the Chieftain’s soup, Caesar’s Laurel Wreath. What will become of “Asterix and the Laurel Wreath” and will Rome ever be the same? These three classic graphic novels are newly translated especially for an American audience. Includes a new afterword by Alexander Simmons providing historical and cultural context for Asterix, both in 50 B.C. and in the time the classic comics were made addressing various racial depictions

Rene Goscinny was born in Paris in 1926. After growing up in Argentina, he came to America where he shared a studio with future Mad magazine co-founder Harvey Kurtzman and collaborators Will Elder and Jack Davis. In 1959, he founded the magazine Pilote which premiered the most successful comic series anywhere: Asterix. He died suddenly cardiac arrest in 1977 at the age of 51.

Albert Uderzo was born in France 1927 to Italian Immigrants. In 1959 Goscinny and Uderzo became editor and artistic director (respectively) of Pilote magazine. Their creation, Asterix became a runaway success. After Goscinny's death in 1977, Uderzo continued to write and illustrate the Asterix books on his own, publishing 8 volumes.