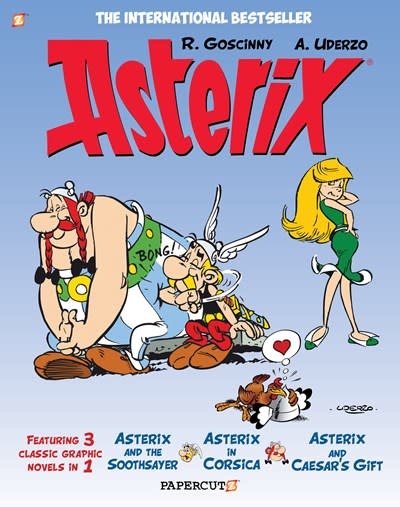 Join Asterix and friends for another round of exciting adventures!

Contains 3 newly-translated classic Asterix tales. Asterix is a fearless Gaul with a magic potion that grants him incredible strength to protect his village and ward off Roman Empire from invading. With his pal, Obelix, the two defend their village from not only the blundering Roman legionairies, but other odd threats as well. First, a fortune telling Soothsayer has the village under his soothing predictions, but Asterix isn’t buying it. Predict who will win in a battle of words between “Asterix and the Soothsayer.” Second, visit “Asterix in Corsica” as he and Obelix must help Chief Boneywasawarriorwayayix to foil the evil designs of Praetor Perfidius and oppose Julius Caesar’s army. Finally, “Ceasar’s Gift” is delivered to the village, a deed to the village itself! Will the village fall under the control of the wrong hands? Includes a new afterword by Alexander Simmons providing historical and cultural context for Asterix, both in 50 B.C. and in the time the classic comics were made addressing various racial depictions