Home » At Night All Blood Is Black: A novel 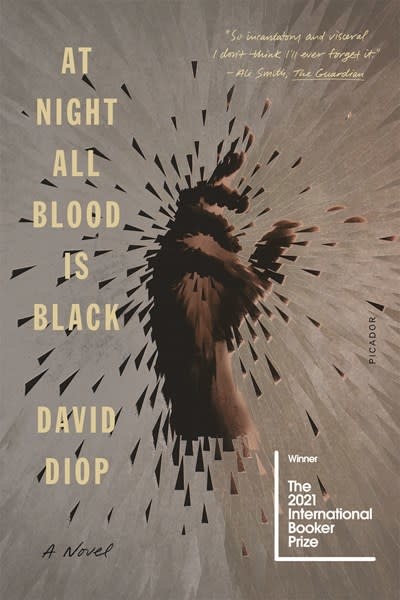 At Night All Blood Is Black: A novel

Selected by students across France to win the Prix Goncourt des Lycéens, David Diop’s English-language historical fiction debut At Night All Blood Is Black is a “powerful, hypnotic, and dark novel” (Livres Hebdo) of terror and transformation in the trenches of the First World War

Alfa Ndiaye is a Senegalese man who finds himself fighting as a so-called Chocolat soldier with the French army during World War I. When his village friend Mademba Diop is mortally wounded in battle, Mademba begs Alfa to kill him and spare him the pain of a long death in no-man’s-land. But Alfa can’t bring himself to strike down a man who is like a brother to him, and Mademba dies in agony.

Faced with what he comes to see as his own cowardice and cruelty, Alfa begins to lose touch with reality. Anxious to avenge the death of his friend and find forgiveness for himself, he adopts a macabre nocturnal ritual: he sneaks across enemy lines every night to find and kill a blue-eyed German soldier, and every night he returns to base, unharmed, with his victim’s severed hand. At first, Alfa’s comrades admire his ingenuity, but rumors soon circulate that this super-soldier isn’t a hero but a sorcerer, a devourer of souls. Plans are hatched to get Alfa away from the front and separate him from his growing collection of hands before his apparent psychosis affects morale. But how does one reason with a demon, and how far will Alfa go to make amends to his dead friend?

Peppered with bullets and black magic, this remarkable novel fills in a forgotten chapter in the history of World War I. Blending fantastical oral storytelling traditions with the day-to-day horror of life in the trenches, David Diop’s At Night All Blood Is Black is a dazzling tale of a man’s descent into madness.

David Diop was born in Paris and was raised in Senegal. He is the head of the Arts, Languages, and Literature Department at the University of Pau, where his research includes such topics as eighteenth-century French literature and European representations of Africa in the seventeenth and eighteenth centuries. At Night All Blood Is Black is his second novel.

Anna Moschovakis’s books of poetry include the James Laughlin Award–winning You and Three Others Are Approaching a Lake and a novel, Eleanor, or, The Rejection of the Progress of Love. Her translations from the French include Albert Cossery’s The Jokers, Annie Ernaux’s The Possession, and Bresson on Bresson.