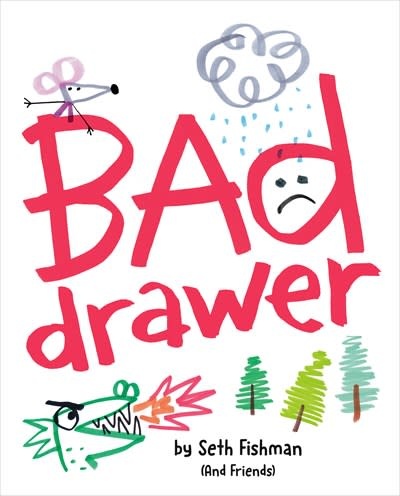 “The Stone Soup of collaborative creativity—eight thumbs up!”—Jessica Love, author of Julián Is a Mermaid

"Bad Drawer is inspiring for every kind of drawer, and it is such a fun, creative way to show what can happen when we work together with our friends." —Nathan Pyle, #1 New York Times bestselling creator of Strange Planet

A hilarious and gorgeous picture book by A Hundred Billion Trillion Stars author Seth Fishman, following a bad drawer who works together with his friends to help bring his wildest stories to life.

Seth has a super fantastic story in his head. A story so completely awesome and unbelievably amazing that he needs to get it out on paper and share it with the world right away. There's only one problem: He's a bad drawer. Like, really bad. He's tried and tried, but his illustrations are never quite like he imagined when they actually land on the page.

But he has an idea that might fix things: What if his friends help him bring his story to life? A delightful picture book featuring work from award-winning illustrators Jessixa Bagley, Armand Baltazar, Anna Bond, Travis Foster, Jessica Hische, Tillie Walden, and Ethan Young, Bad Drawer will make readers laugh out loud and embrace their flaws -- while also having quite a bit of fun in the process.

Seth Fishman is the author of A Hundred Billion Trillion Stars, a Boston Globe–Horn Book Award Honor book and winner of the Mathical Prize, as well as Power Up and The Ocean in Your Bathtub, all illustrated by Isabel Greenberg. He lives with his family in Los Angeles, California.

Jessixa Bagley is an award-winning children’s book author/illustrator. Along with her book work she is a fine artist, comics creator, and teacher of writing and watercolor. In 2016 her picture book Boats for Papa won the SCBWI Golden Kite Award for best picture book text as well as Washington State Book Award for Children’s Books. Her picture book Laundry Day received a 2018 Ezra Jack Keats Honor Award for writing. Many of her picture books are Junior Library Guild Selections including her latest picture books Henry and Bea and Daisy. Jessixa often illustrates for other artists and also collaborates with her artist husband, Aaron Bagley. She lives in Seattle with her husband and son. Armand Baltazar was born 1967 in Chicago’s North Side, not far from the famed Wrigley Field. He began his career in feature animation first as a background artist, then as a visual development artist, and art director for DreamWorks Studios, Walt Disney Feature Animation, Image Movers Digital and Pixar Animation Studio. Working on these films rekindled his boyhood spark for writing and Armand began work on a personal project in his spare time. What began as a simple illustrated adventure story for his son would become the first illustrated novel in his series. Armand currently resides in Northern California with his family, working full time creating the art and stories for the epic illustrated middle grade adventure series Timeless for HarperCollins Publishing. Anna Bond is co-founder and chief creative officer at Rifle Paper Co., a stationery, home and lifestyle brand based on Anna’s hand-painted designs. Together with her husband Nathan, Rifle Paper Co. launched in 2009 as a two-person operation and has since grown into an international brand with products carried in over 6,000 stores around the world and employing over 100 people between their Winter Park, Florida and New York City offices. Born and raised in Summit, New Jersey, Anna received her bachelor’s degree in graphic design before making her way to Orlando, Florida to work as an art director and later as a freelance illustrator before starting Rifle. She has been honored as an ADC Young Gun, spoken at Facebook HQ, designed a USPS postage stamp, and is featured in Grace Bonney’s best-selling book In the Company of Women. Anna currently lives in Maitland, Florida with Nathan and their three young sons. Travis Foster has been illustrating for more than 25 years. Some of his editorial and advertising clients include Target, Sony, Dell, Sprint, Disney, Rodale Press, Forbes, Simon & Schuster, The Wall Street Journal, Internet Week, Aetna and The Washington Post. He lives in Nashville, Tennessee. Jessica Hische grew up in Pennsylvania. She currently lives in San Francisco, where she works as a letterer, illustrator, type designer, and relentless procrastiworker. Clients include Wes Anderson, Dave Eggers, The New York Times, Tiffany & Co., OXFAM America, McSweeney's, American Express, Target, Victoria's Secret, Chronicle Books, Nike, and Samsung. website: jessicahische.is twitter: @jessicahische. Tillie Walden is a cartoonist and illustrator from Austin, TX. She is a graduate of the Center for Cartoon Studies, where she now teaches. As of 2022, she has published three graphic novellas with the London based Avery Hill Publishing and three with First Second Books, including her Eisner Award-winning memoir Spinning. She currently lives in Lebanon, New Hampshire with her cat Stan. Ethan Young was born to Chinese immigrant parents in NYC. Young is an Eisner-nominated cartoonist, best known for NANJING: The Burning City, winner of the 2016 Reuben Award for Best Graphic Novel. His other works include The Dragon Path, Space Bear, and Life Between Panels. In addition to comic book work, Young is also a prolific freelance illustrator, having worked with Animation Domination HD on multiple cartoons for FXX.