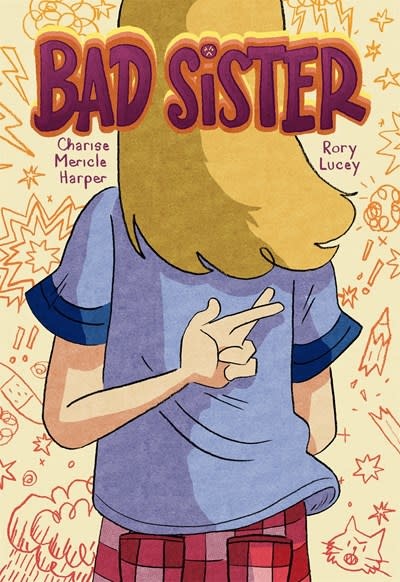 A middle grade graphic memoir following a young girl who undergoes a crisis of conscience, realizing that she is a “bad sister.”

Charise knows this, and she isn’t afraid to use that knowledge. Whether it’s her favorite toy car, affection from the family cat, or time to sit on her mom’s lap, Charise gets what she wants. She doesn’t mean to hurt her little brother, Daniel, in the process, but if he stands in her way, he’s going to get what he deserves.

Of course, just because Charise is older than Daniel doesn’t mean that she is wiser than him. In fact, if Charise can learn to open her heart before she hurts him in a way that she can’t take back, she might discover that her little brother has the greatest power of all.

Charise Mericle Harper has written more than fifty books for children, including the Crafty Cat, Fashion Kitty, and Just Grace series, and The Good For Nothing Button. Charise is excited and slightly nervous to share Bad Sister with the world. It’s not easy to admit you were bad, even if now you are very, very good. chariseharper.com

Rory Lucey is an illustrator and art teacher. He is the author and illustrator of Jonesy: Nine Lives on the Nostromo and a contributor to Alien: 40 Years 40 Artists, both from Titan Books. He lives in New Jersey with his wife and two cats. rorylucey.com