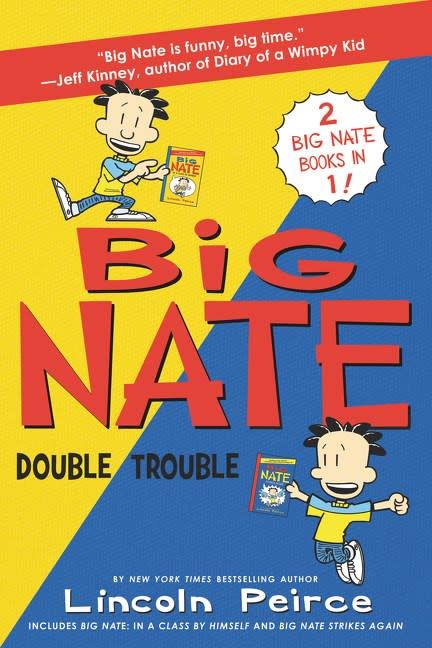 A new paperback bind-up of the first two novels in the New York Times bestselling Big Nate series: Big Nate: In a Class By Himself and Big Nate Strikes Again.

A new paperback bind-up of the first two novels in the New York Times bestselling Big Nate series: Big Nate: In a Class By Himself and Big Nate Strikes Again. This bind-up is the perfect low-priced introduction to the classic series.

Big Nate: In a Class By Himself is the first book in the beloved and bestselling series. Nate knows he’s meant for big things. REALLY big things. But things don’t always go your way just because you’re awesome. Nate barely survives his dad’s toxic oatmeal before rushing off to school—minus his lunch, THEN he body slams the no-nonsense principal, and accidentally insults the scariest teacher in school. And school has barely started!

When everything seems to be going wrong, can Nate prove that he’s really destined for greatness?

Big Nate: Strikes Again is the second book in the Big Nate series. This time he’s stuck with Gina, his all-time enemy, in a class project for his least favorite teacher, Mrs. Godfrey, aka Godzilla. To make matters worse, Ginal ALSO ends up on his fleeceball time, right when Nate is set to win his first fleeceball championship ever. This is his moment for glory, but Gina’s sure to steal his thunder, or ruin everything.

For fans of the hilarious Diary of a Wimpy Kid series: Get ready to meet Big Nate, accidental mischief maker and definitely not the teacher’s pet.