Home » Barack and Joe: The Making of an Extraordinary Partnership 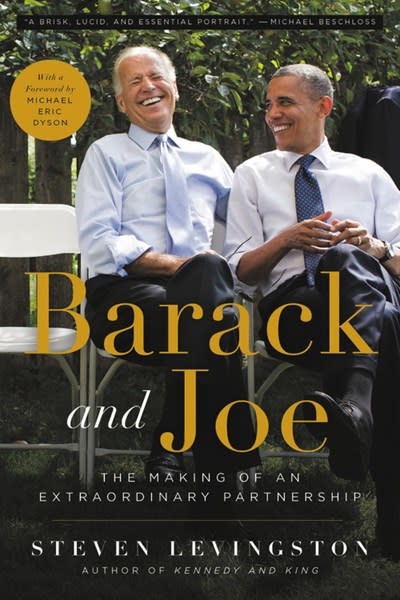 Barack and Joe: The Making of an Extraordinary Partnership

A vivid and inspiring account of the "bromance" between Barack Obama and Joe Biden.

The extraordinary partnership of Barack Obama and Joe Biden is unique in American history. The two men, their characters and styles sharply contrasting, formed a dynamic working relationship that evolved into a profound friendship. Their affinity was not predestined. Obama and Biden began wary of each other: Obama an impatient freshman disdainful of the Senate's plodding ways; Biden a veteran of the chamber and proud of its traditions.

Gradually they came to respect each other's values and strengths and rode into the White House together in 2008. Side-by-side through two tension-filled terms, they shared the day-to-day joys and struggles of leading the most powerful nation on earth. They accommodated each other's quirks: Biden's famous miscues kept coming, and Obama overlooked them knowing they were insignificant except as media fodder. With his expertise in foreign affairs and legislative matters, Biden took on an unprecedented role as chief adviser to Obama, reshaping the vice presidency. Together Obama and Biden guided Americans through a range of historic moments: a devastating economic crisis, racial confrontations, war in Afghanistan, and the dawn of same-sex marriage nationwide. They supported each other through highs and lows: Obama provided a welcome shoulder during the illness and death of Biden's son Beau.

As many Americans turn a nostalgic eye toward the Obama presidency, Barack and Joe offers a new look at this administration, its absence of scandal, dedication to truth, and respect for the media. This is the first book to tell the full story of this historic relationship and its substantial impact on the Obama presidency and its legacy.

Steven Levingston is the author of Little Demon in the City of Light, Kennedy and King, which was named a New York Times Editor's Choice selection and a Washington Post Notable Book of 2017, and Barack and Joe. The non-fiction book editor of the Washington Post, he has lived and worked in Beijing, Hong Kong, New York, Paris, and Washington and reported and edited for the Wall Street Journal and International Herald Tribune.