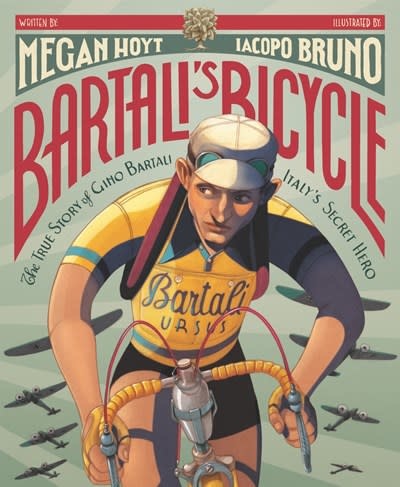 The inspiring, true story of Gino Bartali—beloved award-winning Italian cyclist, humble man, and secret champion in the fight for human rights during WWII and the Holocaust.

Gino Bartali cycled across Italy, winning one race after another. And when he won the 1938 Tour de France, Gino became an international sports hero. But everything changed the following year when World War II broke out.

Soldiers marched into Italy. Tanks rolled down the cobbled streets of Florence. And powerful leaders declared that Jewish people should be arrested.

To the entire world, Gino Bartali was just a champion cyclist. But Gino was keeping his greatest achievement hidden. Only upon his death was the truth uncovered—that he secretly worked with the Italian resistance to save more than eight hundred men, women, and children from certain death, using the one thing no authority would ever question—his bicycle.