Home » Basher Science: An A to Z of Science 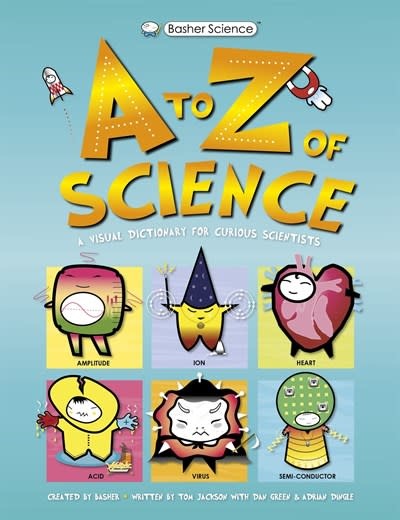 Basher Science: An A to Z of Science

This handy visual dictionary covers the key topics in the core STEM subjects of biology, chemistry, and physics.

The A-Z of Science brings the unique and popular Basher illustrative approach of capturing key scientific concepts as quirky but memorable characters, combined with the informative, humorous, and accessible text of science author Tom Jackson. The A-Z of Science includes over 300 scientific definitions, many of them accompanied by Basher's perennially popular hip-kicky illustrations.

The entries are organized alphabetically, and cover all the topics you would expect to find in a core science book, from acids and atoms to X-rays and zygotes. Break-out feature spreads cover more complex, high-interest topics such as classification, cell, and nitrogen cycle.

Tom Jackson is a highly experienced science writer and editor who has written many titles in the bestselling series Eyewitness Science, including Computer and Science. His other titles include How to Build a Human Body and his book on the history, science, and technology behind refrigerators, Chilled. Tom lives in Bristol, UK.

Simon Basher is the creator and illustrator of more than a dozen internationally best-selling books for children, including the critically acclaimed Basher Science series which has sold over 3 million copies around the world.