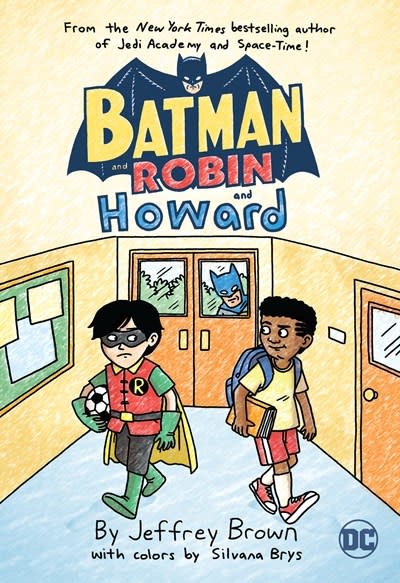 Sidelined by a crime-fighting field trip gone wrong, Damian Wayne must refocus his attention on his life as an average student and learning how to be a team player—especially when he meets his match in his new rival, Howard.

To Damian Wayne, there is nothing more important than protecting the streets of Gotham City as Robin. But when he makes a critical mistake while out on patrol, Damian finds himself benched. And what’s more, Damian’s dad, Bruce Wayne—a.k.a. Batman—decides that starting over in a new school will be just the distraction Damian needs from his superhero routine.

Certain that Gotham Metro Academy has nothing to teach him, Damian is completely unprepared for the challenge he finds in Howard—the smartest and most athletic kid in school. The boys’ rivalry is instantaneous and fierce…and both are sure only one of them can be the best in their class.

What follows is a funny story of rivalry, friendship, and mystery from bestselling author and illustrator Jeffrey Brown.

Jeffrey Brown is the bestselling author and illustrator of the middle grade Jedi Academy series as well as the Darth Vader and Son series. Jeffrey has written a number of autobiographical books for adults, humorous graphic novels about cats, and parodies like Incredible Change-Bots. His middle grade series Lucy & Andy Neanderthal was 40,000 years in the making, and his new series, Space-Time!, is a middle grade romp across the galaxy.