Home » Batpig: Too Pig to Fail 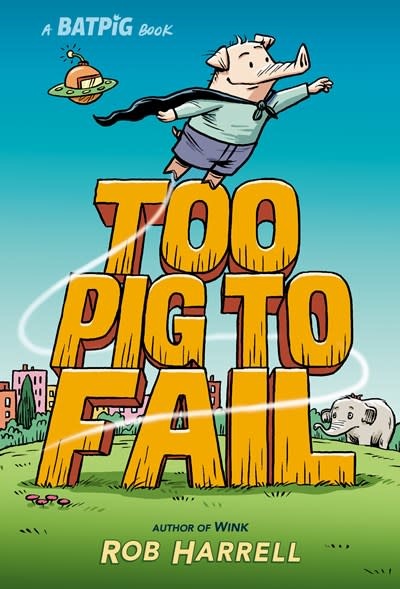 Batpig: Too Pig to Fail

In this hilarious, hijinks-filled graphic novel super-swine Batpig is ready to face even bigger bullies, harder fights, and scariest of all—meeting his superhero idol.

Ordinary pig, Gary Yorkshire, has his entire life turned upside down when a bite on the nose from a radioactive bat turns him into…BATPIG. With the support of his best friends, Brooklyn the bat and Carl the fish, he finally feels like he’s getting a handle on this whole superhero business. That is, until he faces a battle against time itself, when an underappreciated janitor slows down the clock so much that a math class never ever ends (the horror!). Can Batpig save the class from never-ending fractions?

Rob Harrell is the author/illustrator of Wink, created the Life of Zarf series, the graphic novel Monster on the Hill, and also writes and draws the long-running daily comic strip [email protected], which appears in more than 140 papers worldwide. He created and drew the internationally syndicated comic strip Big Top until 2007. He lives with his wife in Indiana.