Home » Be a Work in Progress: And Other Things I'd Like to Tell My Younger Self 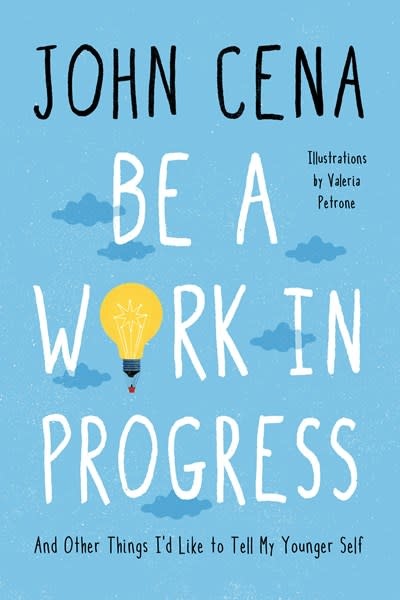 Be a Work in Progress: And Other Things I'd Like to Tell My Younger Self

“Be brave enough to embrace humility. The reward will be confidence.”

For years, John Cena has been using his popular Twitter feed to uplift his followers with his unique brand of positivity. Now, he collects his favorite words of wisdom on the benefits of being bold and open-minded, embracing discomfort, and making the most of every opportunity.

Heartfelt and hopeful, Be a Work in Progress is the pick-me-up readers will turn to again and again to reap the benefit of his values.

John Cena is a #1 New York Times bestselling author, multifaceted entertainer, and dedicated philanthropist. A longtime WWE superstar, his films include Ferdinand; F9, the next installment of the Fast and the Furious series; and The Suicide Squad and its spinoff TV show, Peacemaker. Inspired by Richard Scarry—one of his favorite children’s book creators—John is the author of the Elbow Grease series of picture books.

Valeria Petrone has illustrated numerous picture books, including Red Truck, Blue Boat, and Yellow Copter (all by Kersten Hamilton) and Plumply, Dumply Pumpkin (by Mary Serfozo), and does editorial illustration for several Italian and UK magazines. She lives in Milan, Italy.