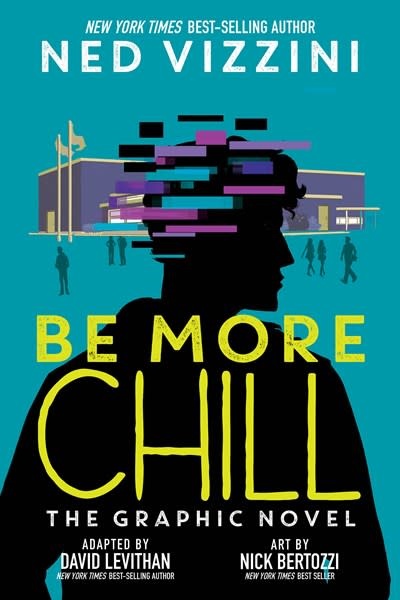 Be More Chill: The Graphic Novel

Jeremy Heere is your average high school dork. Day after day, he stares at beautiful Christine, the girl he can never have, and dryly notes the small humiliations that come his way. Until the day he learns about the "squip."

A pill-sized supercomputer that you swallow, the squip is guaranteed to bring you whatever you most desire in life. By instructing him on everything from what to wear, to how to talk and walk, the squip transforms Jeremy from geek to the coolest guy in class. Soon he is friends with his former tormentors and has the attention of the hottest girls in school.

But Jeremy discovers that there is a dark side to handing over control of your life--and it can have disastrous consequences.

Author Bio: Ned Vizzini began writing for The New York Press at the age of fifteen. At nineteen, he had his first book published, Teen Angst? Naaah…. He was also author of three other books for young adults including The Other Normals, Be More Chill, the first young adult novel ever chosen as a Today Show Book Club pick, and which is the basis of the musical of the same name, and It's Kind of a Funny Story, which NPR named #56 of the "100 Best-Ever Teen Novels" of all time and which is the basis of the film of the same name. The last novel published before his death, House of Secrets, was a middle-grade fantasy novels co-written with filmmaker Chris Columbus; it debuted on the New York Times best-seller list.

David Levithan is the author or co-author of many novels about teen life, including Boy Meets Boy, Nick & Norah's Infinite Playlist (written with Rachel Cohn), Every Day, Two Boys Kissing, 19 Love Songs, and Will Grayson, Will Grayson (written with John Green). By day, he's a publisher and editor, working on other people's novels and graphic novels. This is his first graphic novel adaptation, which he did out of his love for Ned Vizzini and his admiration for both the novel's and the musical's many enthusiastic fans. You can find him on Twitter at @loversdiction.

Illustrator Bio: Nick Bertozzi is an award-winning cartoonist. Some of his most notable works include The Salon, Lewis & Clark, Persimmon Cup, the New York Times best-selling Shackleton: Antarctic Odyssey, the New York Times best-selling Jerusalem: A Family Portrait (written by Boaz Yakin), and Becoming Andy Warhol. He has received the Ignatz Award and multiple Harvey Awards, and teaches cartooning at the School of Visual Arts. Nick lives in Queens, NY, with his wife and daughters. Visit him online at nickbertozzi.com.