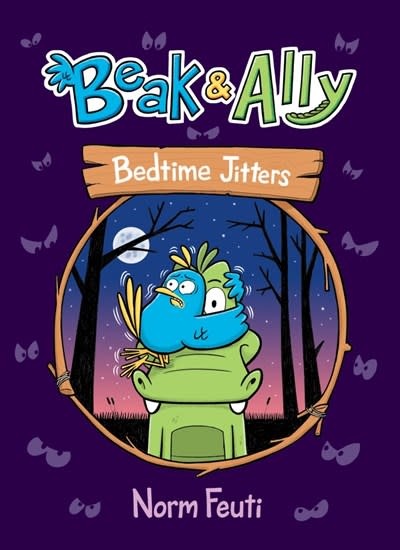 Now in paperback! Mysteries abound in Beak & Ally: Bedtime Jitters, the second book in a series by Geisel honor winning Norm Feuti about what happens when Beak hears some scary noises in the swamp at night.

Mysteries abound in this funny friendship story about two unexpected friends!Late at night, the swamp is full of weird noises . . . spooky noises! Like the GUURNT GUURNT! of the horrible Grunty Beast, the CHH CHH CHH CHH of the chilling Chatter Ghosts, and the ZZUMP ZZUMP of the Mechanical Zump Monster! How's Beak the bird supposed to get any rest with these scary sounds all around him? Luckily, Ally the alligator has some good ideas about where all the racket is coming from.Beak & Ally is an early reader graphic novel series by Norm Feuti, perfect for emerging readers and comic lovers alike.