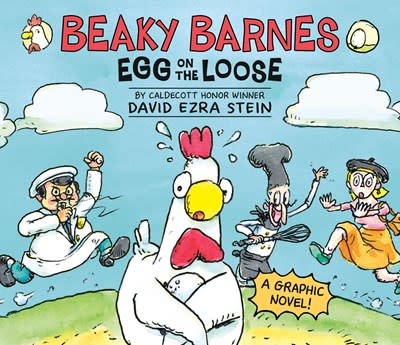 Beaky Barnes: Egg on the Loose

Caldecott Honor winner David Ezra Stein takes readers on a slapstick journey in his debut graphic novel series, featuring Beaky Barnes, a no-nonsense chicken who's determined to save her desirable egg. But with a hungry inspector, a desperate chef, and an entrepreneurial woman on her tail, Beaky has to use every tool in her chicken coop to make her grand escape.

All the inspector wanted was an egg to go in his sandwich, so he heads to the cafe. The problem? The town is entirely out of eggs, and the local chef is panicked. Luckily, he spots a lovely duo having lunch: a woman and a chicken named Beaky Barnes. It's his lucky day. But when the woman and Beaky have a fight over an offensive business arrangement (chicken-pulled coach service, anyone?), chaos ensues. With a chicken on the run, and an inspector and woman in hot pursuit, three stories emerge with hilarious results!

Award-winning children's author and illustrator David Ezra Stein (he/him) was born in Brooklyn, New York. His works include Interrupting Chicken, Leaves, Monster Hug!, Tad and Dad, Pouch!, and Ol' Mama Squirrel. In addition to winning the Ezra Jack Keats award in 2008 and a Caldecott Honor in 2011, Stein's books have been named to several major book lists, such as Publishers Weekly's Best Book of the Year, Kirkus Reviews' Editor's Choice, and School Library Journal's Best Book. He lives in Kew Gardens, New York, with wife, Miriam, and their son, Sam.