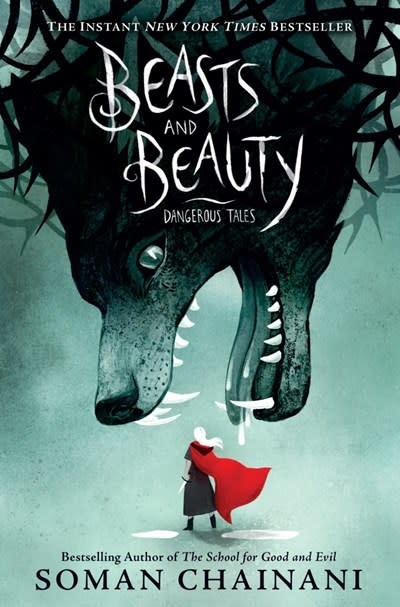 Forget the tales you thought you knew in this collection of twelve dangerous stories from New York Times bestselling author Soman Chainani that challenges you to believe in your own strength, to face your demons with hope and an open heart, and to always think for yourself. This critically-acclaimed, instant New York Times and Indie bestseller is now available in paperback!

You think you know these stories, don’t you?You are wrong. You don’t know them at all.Twelve tales, twelve dangerous tales of mystery, magic, and rebellious hearts. Each twists like a spindle to reveal truths full of warning and triumph, truths that free hearts long kept tame, truths that explore life…and death.A prince has a surprising awakening...                           A beauty fights like a beast...A boy refuses to become prey...A path to happiness is lost...then found again.New York Times bestselling author Soman Chainani respins old tales into fresh fairy tales for a new era and creates a world like no other. These stories know you. They understand you. They reflect you. They are tales for our times. So read on, if you dare.

Soman Chainani is the New York Times bestselling author of the School for Good and Evil series. The fairy-tale saga has sold over 3 million copies, been translated into 31 languages across six continents, and will soon be a major motion picture from Netflix, which Soman will executive produce. His most recent book, Beasts and Beauty: Dangerous Tales, was also an instant New York Times bestseller and is in development to be a television series from Sony 3000.A graduate of Harvard University, Soman created his own fairy-tale major before he went on to an MFA in film at Columbia University. He has made films that have played all over the world, and his writing awards include honors from Big Bear Lake, the CAPE Foundation, and the Sun Valley Writers’ Fellowship.Every year, he visits schools around the world to speak to kids and share his secret: that reading is the path to a better life.You can visit Soman at www.somanchainani.com or www.schoolforgoodandevil.comJulia Iredale is an artist from Victoria, BC. She earned a Bachelors degree in Illustration from Emily Carr University in 2015, and now works as a freelance illustrator for clients around the world. Her work is informed by her love of mythology, dark fantasy, and human psychology, weaving these together to create beautiful, mysterious characters and worlds.