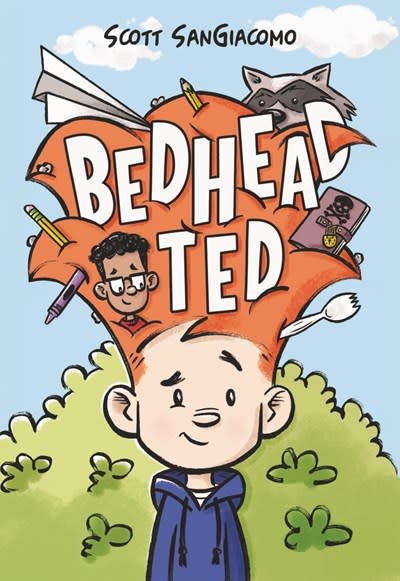 For fans of the Lunch Lady and Hilo series comes a charming, funny young middle grade graphic novel from debut author-illustrator Scott SanGiacomo, about a boy named Ted who realizes that his perceived flaw—wild red hair—is actually his superpower.

Ted has always had one giant problem: his hair. No matter what he does, nothing can tame his unruly mane. Starting fourth grade is going to bring BIG obstacles, especially with teasing from bullies. That’s how he got the name Bedhead Ted after all. But Ted has his best friend, Stacy, to distract him. So when Stacy becomes obsessed with Brookside’s mythological Beast—a giant raccoon terrorizing the town—Ted is ready to help him unravel the mystery.But when new friends enter the mix, Ted’s friendship with Stacy gets a little rocky. And when Stacy gets the idea to search for the Brookside Beast on his own, only Ted and his unruly hair can save him. For the first time in his life, Ted wonders if his hair might just be a gift rather than an epic curse.

Scott SanGiacomo is an author/illustrator whose work has appeared in children’s books, animation, and magazines. He is a graduate of the School of the Museum of Fine Arts at Tufts University. Bedhead Ted is his debut graphic novel. Scott lives with his family in Massachusetts.