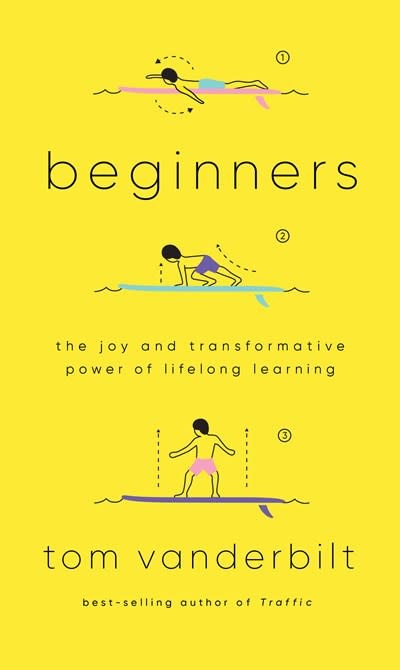 The best-selling author of Traffic and You May Also Like now gives us a thought-provoking, playful journey into the transformative joys that come with starting something new, no matter your age

Why do so many of us stop learning new skills as adults? Are we afraid to be bad at something? Have we forgotten the sheer pleasure of beginning from the ground up? Or is it simply a fact that you can’t teach an old dog new tricks?

Inspired by his young daughter’s insatiable need to know how to do almost everything, and stymied by his own rut of mid-career competence, Tom Vanderbilt begins a year of learning purely for the sake of learning. He tackles five main skills (and picks up a few more along the way), choosing them for their difficulty to master and their distinct lack of career marketability—chess, singing, surfing, drawing, and juggling. What he doesn’t expect is that the circuitous paths he takes while learning these skills will prove even more satisfying than any knowledge he gains.

He soon finds himself having rapturous experiences singing Spice Girls songs in an amateur choir, losing games of chess to eight-year-olds, and dodging scorpions at a surf camp in Costa Rica. Along the way, he interviews dozens of experts to explore the fascinating psychology and science behind the benefits of becoming an adult beginner. Weaving comprehensive research and surprising insight gained from his year of learning dangerously, Vanderbilt shows how anyone can get better at beginning again—and, more important, why they should take those first awkward steps. Ultimately, he shares how his refreshed sense of curiosity opened him up to a profound happiness and a deeper connection to the people around him. It’s about how small acts of reinvention, at any age, can make life seem magical.

TOM VANDERBILT has written for many publications, including The New York Times Magazine, The Wall Street Journal Magazine, Popular Science, Financial Times, Smithsonian, and London Review of Books, among many others. He is a contributing editor of Wired UK, Outside, and Artforum. He is author of You May Also Like: Taste in an Age of Endless Choice, Traffic: Why We Drive the Way We Do (and What It Says About Us), and Survival City: Adventures Among the Ruins of Atomic America. He has appeared on a wide range of television and radio programs, from the Today show to the BBC’s World Service to NPR’s Fresh Air. He has been a visiting scholar at NYU’s Rudin Center for Transportation Policy and Management, a research fellow at the Canadian Centre for Architecture, a fellow at the Design Trust for Public Space, and a winner of the Warhol Foundation Arts Writers Grant, among other honors. He lives in Brooklyn, New York.