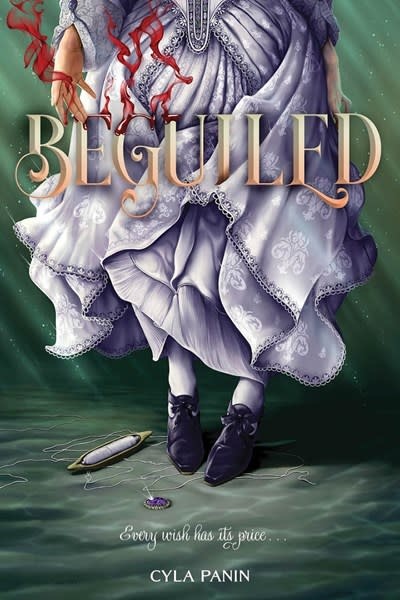 A dark and enthralling story about a young woman who makes a deal with a spirit to try and gain her independence—and the twisted price she has to pay for itElla is a 17-year-old weaver whose entire livelihood depends on her loom. She dreams of opening her own shop, but when her father died in debtor’s prison, she had to support herself by taking whatever clients she could get. In order to buy her supplies she goes into debt of her own, and when her loom breaks, Ella realizes she needs more help than a repairperson can give her. She, like everyone, has heard about the old washerwoman spirit called the Bean-Nighe who will grant any one wish—for a price.

But Ella is desperate, so she asks the Bean-Nighe to fix her loom. And it works. The loom is fixed, and she creates beautiful pieces she could have never imagined before. All she has to do is feed the loom a drop of blood each time she weaves—a small price to pay for such magnificent silks. And when she brings two bolts to a rich client, she meets a mysterious young man named Callum and bargains for an invitation to his exclusive party. At that party, he's so mesmerized by her talent, he offers Ella a place to live and patronage for her art. It seems like Ella's fortune is finally turning for the better . . . until she begins to notice the loom taking more from her than she offered.

As she becomes entangled in the lives of the city’s rich, swept into Callum's allure, and trapped by the Bean-Nighe’s magic, Ella must figure out a way to secure her future while she still has a future at all.

Cyla Panin lives in Calgary, Alberta, with her husband and two sons. Her debut novel, Stalking Shadows, was called “both beautiful and brutal” by Kirkus Reviews. She has a bachelor of arts in English with a concentration in creative writing from Mount Royal University.