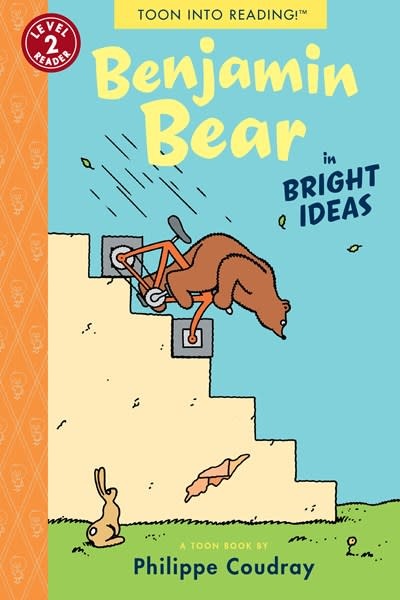 Our favorite fuzzy friend, the idiosyncratic Benjamin Bear, returns with a whole new set of problems to solve.

Knitting a sheep a sweater? Visiting a fish’s underwater house? Soaring down a staircase on a square-wheeled bicycle? These could only be the predicaments of beloved character Benjamin Bear! Our favorite fuzzy friend returns with a whole new set of problems to solve—but when it comes to Benjamin Bear, the solutions may cause just as much trouble.

Series Overview: Benjamin Bear can always surprise his friends, whether it's by walking on his hands during a snowstorm or by using a tree as a parachute. This unassuming bear may at first seem down-to-earth, but his ideas are always out of this world. His zany approach to life has earned him two Eisner Award nominations and global bestseller status.

Phillipe Coudray loves drawing comics and working with his twin brother Jean-Luc, who is also a humorist. Philippe’s books are often used in the schools of France, his home country, where Benjamin Bear’s French cousin, Barnabé, has won many prizes. In the US, Benjamin Bear in Fuzzy Thinking was nominated for an Eisner Award.