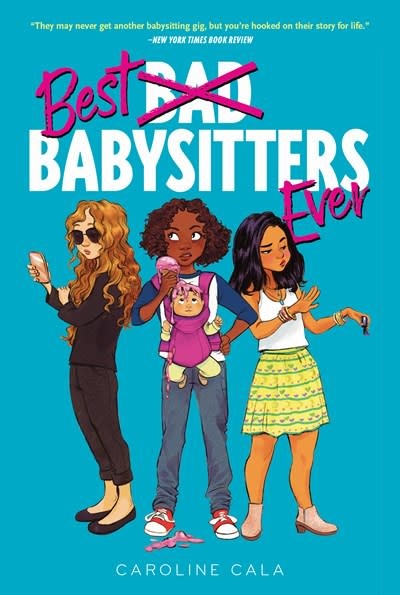 A funny new middle grade series about three 12-year-old best friends who start a babysitting club in their small California town. Perfect for fans of series like Whatever After and the Dork Diaries.

Once upon a time, a girl named Kristy Thomas had a great idea: to form The Baby-Sitters Club with her best friends. And now twelve-year-old Malia Twiggs has had a great idea too. Technically, she had Kristy’s idea. (And technically, little kids seem gross and annoying, but a paycheck is a paycheck). After a little convincing, Malia and her friends Dot and Bree start a babysitting club to earn funds for an epic birthday bash. But babysitting definitely isn’t what they thought it would be.

Caroline Cala is a writer and editor residing in Brooklyn. She has worked as a book editor and as a ghostwriter on a number of books by notable people. Her work has appeared in Vogue, ELLE, Refinery29, and others. Best Babysitters Ever is her middle grade debut. Visit her on Instagram @CarolineCala.