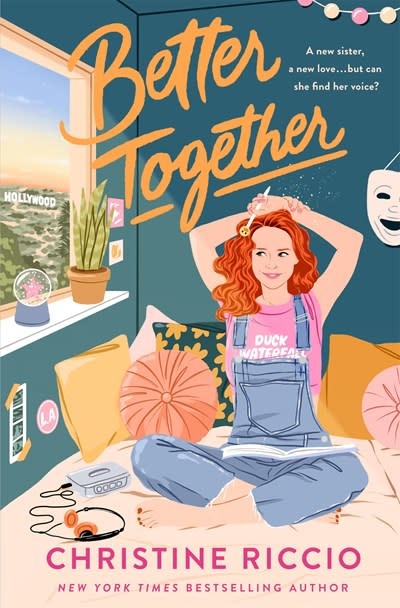 Freaky Friday meets The Parent Trap in this sparkling and heartfelt story about sisters, second chances, finding romance, and finding yourself.

Jamie’s an aspiring standup comic in Los Angeles with a growing case of stage anxiety.

They’ve both signed up for the same session at an off the grid Re-Discover Yourself Retreat in Colorado. When they run into each other, their worlds turn upside down.

Jamie and Siri are sisters, torn apart at a young age by their parent's volatile divorce. They’ve grown up living completely separate lives: Jamie with their Dad and Siri with their Mom. Now, reunited after over a decade apart, they hatch a plot to switch places. It’s time they get to know and confront each of their estranged parents.

With an accidental assist from some fortuitous magic, Jamie arrives in New Jersey, looking to all the world like Siri, and Siri steps off her flight sporting a Jamie glamour.

The sisters unexpectedly find themselves stuck living in each other's shoes. Soon Siri's crushing on Jamie's best friend Dawn. Jamie's falling for the handsome New Yorker she keeps running into, Zarar. Alongside a parade of hijinks and budding romance, both girls work to navigate their broken family life and the stresses of impending adulthood.

CHRISTINE RICCIO is the New York Times bestselling author of Again, But Better. She’s been on a quest to encourage more humans to read since the third grade. Her YouTube channel PolandbananasBOOKS has over 410,000 book-loving subscribers. She makes comedic book reviews, vlogs, sketches, and writing videos chronicling the creation of her own novels. She’s also one of the three YouTubers behind BOOKSPLOSION—YouTube’s longest-running book club. She graduated from Boston University in 2012 with a degree in Film and TV and now lives in Los Angeles, CA.