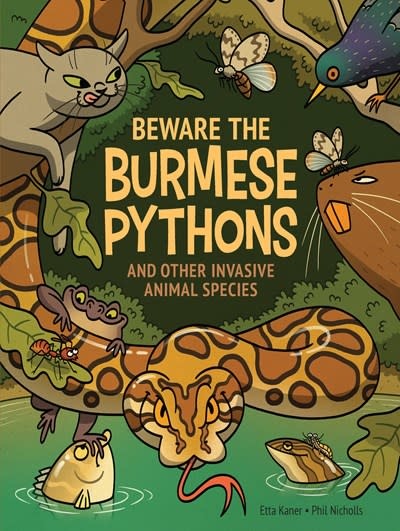 A kid-friendly introduction to invasive animal species.It might not seem like a big deal when a non-native animal species finds its way to a new environment. But it can be! Especially when these species end up destroying the ecosystem in their new neighborhood! Here are stories of 10 of these invasive species --- from tiny cactus moths to ginormous Burmese pythons --- from how they got to their current homes (it was always humans who brought them!) to the damage they're causing there. Who knew there were so many “aliens” living among us? Kids will want to find out more!

A kid-friendly introduction to invasive animal species that explores how they got into new ecosystems and the damage they've caused.

It might not seem like a big deal when a non-native animal species finds its way to another environment. But it can be! Invasive species reproduce quickly and often have no natural predators, allowing them to overtake native species, and even destroy the ecosystem of their new home. Here's an intriguing look at 10 of these species from around the world - from tiny cactus moths to mighty Burmese pythons - and the problems they're causing. As each section explains, humans were responsible for bringing all these animals to their new locations. And now it's up to humans to do something about it!

In this unique, highly visual book, Etta Kaner's accessible text and Phil Nicholls's vibrant art reveal a fascinating world of "aliens" that invade new habitats. With two spreads for each animal, the book is chock-full of information, including the animal's features, habitat and invasion route; a narrative describing how it became invasive and why it's become a problem; and a list of ideas for what can be done, ending with the question, "If you were a scientist or conservation officer, what would you do?" The text is presented in fun, eye-catching formats, ranging from comic strips to posters to newspaper articles, keeping the engagement level high and highlighting what scientists are currently doing to solve the problems. There are strong life-science connections here on characteristics of living things, ecosystems and habitats. Contains a glossary, sources, further reading and how to help.

Etta Kaner is the author of many nonfiction books for children, including Wild Buildings and Bridges. When she's not writing or teaching, she loves to read, cook, garden and spend time with her family. She's always on the lookout for invasive species, such as tawny crazy ants, in her garden. Etta lives in Toronto, Ontario.

Phil Nicholls is an illustrator from Lindsay, Ontario. He studied illustration at Sheridan College. Phil loves animals, especially his favorite invasive animal: his dog, Rupert. He lives in Toronto.