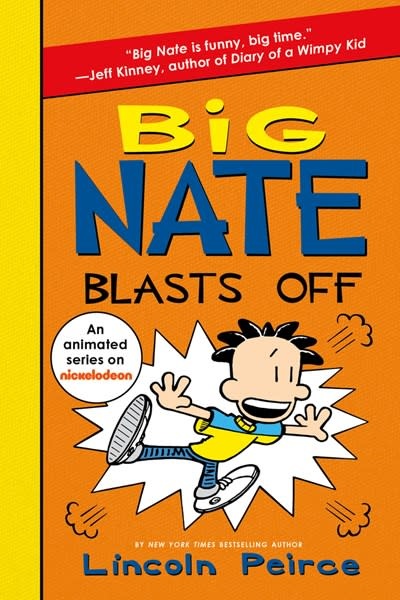 The 8th novel in the New York Times bestselling Big Nate series! With a new crush, and the annual Mud Bowl coming up, can Nate make a good impression without slipping up?

With more detentions than he can count, Nate is in DEEP in Big Nate Blasts Off!Nate is stuck in detention, AGAIN, and Gina won’t stop bothering him about the stupid Weekly Bugle, AND the annual Mud Bowl ultimate Frisbee game against P.S. 38’s biggest rivals—Jefferson Middle School—coming up. Will Nate be the star of the team, or a total bomb?And can he keep his crush on new-girl Ruby a secret, or will someone spill the details?

Lincoln Peirce (pronounced “purse”) is a cartoonist/writer and New York Times bestselling author of the hilarious Big Nate book series (www.bignatebooks.com), now published in twenty-five countries worldwide and available as ebooks and audiobooks and as an app, Big Nate: Comix by U! He is also the creator of the comic strip Big Nate. It appears in over 400 U.S. newspapers and online daily at www.gocomics.com/bignate. Lincoln’s boyhood idol was Charles Schulz of “Peanuts” fame, but his main inspiration for Big Nate has always been his own experience as a sixth grader. Just like Nate, Lincoln loves comics, ice hockey, and Cheez Doodles (and dislikes cats, figure skating, and egg salad). His Big Nate books have been featured on Good Morning America and in the Boston Globe, the Los Angeles Times, USA Today, and the Washington Post. He has also written for Cartoon Network and Nickelodeon. Lincoln lives with his wife and two children in Portland, Maine.