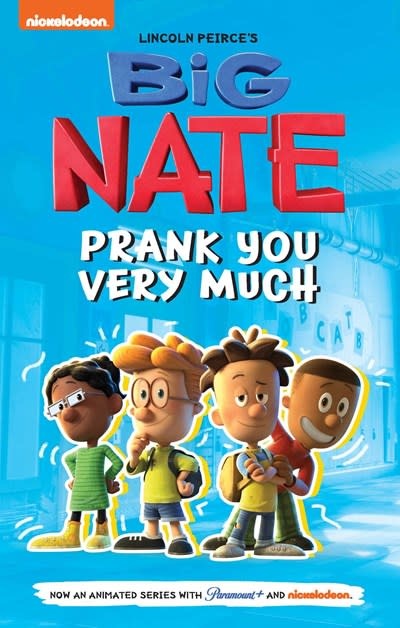 Big Nate: Prank You Very Much

This dynamic graphic novel is based on the Big Nate animated series on Paramount+ and Nickelodeon, featuring storylines from animated shorts and full-length episodes. Starring Nate, Francis, Dee Dee, Teddy, and friends, these hilarious escapades will thrill longtime Big Nate fans as well as new readers. It's Big Nate like you've never seen him before!

When it comes to making mischief, Nate Wright's in a class by himself. Whether he's pranking his sister with fluorescent toothpaste or giving the school yearbook an unauthorized glow-up, Nate's genius for trickery always earns straight As.

Based on the hit Big Nate TV show on Paramount+ and Nickelodeon, Big Nate: Prank You Very Much features stories from two shorts and two complete episodes. In "The Pimple of Power," a honkin’ zit on Nate’s forehead unexpectedly becomes the most miraculous good luck charm in school history. In “Time Disruptors,” Nate and his pals channel a legendary team of superheroes to rescue Francis from the clutches of P.S. 38’s obnoxious archrival, Jefferson Middle School. Two short stories showcase Nate’s unmatched prank-pulling flair along with his hilarious response to a school picture day gone horribly wrong.

Combining the animated series’s full-color artwork with the hand-drawnillustrations  so familiar to fans of Big Nate comics, Prank You Very Much packs a serious comic punch!