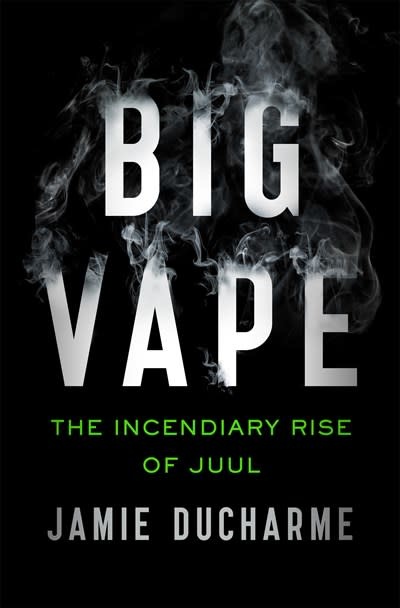 For readers of Bad Blood and The Smartest Guys in the Room, an eye-opening work of narrative nonfiction chronicling the rise of Juul and the birth of a new addiction.

It began with a smoke break. James Monsees and Adam Bowen were two ambitious graduate students at Stanford, and in between puffs after class, they dreamed of a “safe cigarette.” Their solution was the Juul, a sleek, modern device similar to a thumb drive that could vaporize nicotine into a conveniently potent dose. The company they built around that device, Juul Labs, would go on to become a $38 billion company, selling sixteen million Juul devices in 2017 alone and addicting a whole new generation of underage tobacco users.

But as their sales skyrocketed, a health crisis broke out with vape users falling ill from a mysterious lung illnesses, and Juul Labs began to crumble internally due to infighting, backstabbing, and betrayal. Time magazine reporter Jamie Ducharme traces how the duo of Monsees and Bowen created Big Vape—along with the explosion of e-cigarette use in America—and how, in the process, they went from public health visionaries and Silicon Valley wunderkinds to two of the most reviled businessmen in the country.

With rigorous reporting and clear-eyed prose that reads like a nonfiction thriller, Big Vape uses the dramatic rise and fall of Juul to tell a larger story of big business, big tobacco, and the high cost of a product that was too good to be true.

Jamie Ducharme is a journalist at Time magazine where she covers health, science, medicine, breaking news, politics, and business.