Home » Bigger Than a Dream 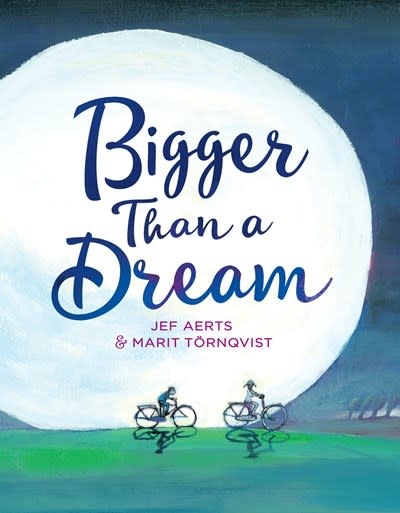 Bigger Than a Dream

People fear death (apparently just a tiny bit less than public speaking). We don't know how to talk about it, especially to children, and we're afraid to bring it up for fear of making people sadder.

Yet children, especially, have questions, and this incredibly gentle and surprisingly light story is full of both comfort and vividly imagined "answers." The first one gives the book its title: A boy hears the voice of his sister calling him one day, a sister he's never met because she died before he was born. The sister in the faded photograph on the wall. So that night he asks his mother what death is like and she tells him, "It's like dreaming, only bigger."

That's lovely, but he still has questions, which it turns out his sister can answer! On a dreamy, carefree adventure they ride their bikes together, (not always on the ground), visiting places that were special to her when she was alive. And she talks to him in the older sister, teasing, straightforward, loving way that is exactly what he needs. (It turns out that death is not the only thing that can be Bigger Than a Dream.)

Much, much more than bibliotherapy, this is a work of art that speaks with honesty and tenderness about one of life's great mysteries

Jef Aerts grew up in a wooded village in Belgium. On this list we offer you his first picture book, Bigger Than a Dream, winner of the Book Lion Prize. LQ also proudly brings you this tender and funny MG novel, The Blue Wings. Aerts lives with his wife and three children on a small farm.

Marit Törnqvist was born in Uppsala, Sweden, and moved to the Netherlands with her family when she was five. Her illustrations of Astrid Lindgren's work have gained her international acclaim, as has her writing. The first book she wrote, A Short Story About Love, won a Silver Pencil.